It’s kind of hard to believe it’s been a few years since I posted on the 458.2 break up of the Cumberland cluster in the R-Z18 project. I figured it’s time to go forward a bit. Look at new members on each side of that divide and think about our Big Y results so far.

Data is coming in fast

Big Y data is coming in very fast now, with loads of new SNPs to map. A process that used to take years is happening in a few months and the volunteer admins of our Y DNA groups are being presented with new information all the time. Joining a Y haplogroup project is one easy way to stay informed and learn more about your group and what next steps you may want to take.

A Cumberland cluster (DF95) person is lucky to fall under several projects. In order of inheritance down the family tree:

All the groups are FTDNA groups but they also have their own separate websites or forums that you can get to from their groups page.

The U106 group has been putting together different age ranges for the SNPs below U106 based on Big Y data and a lot of math that I don’t completely understand. I know that it’s complicated and that there are several methods and also that it’s very hard to know things for certain so everything is done at “confidence levels”.
So a huge caveat, as this new post proves, nothing is set in stone and I didn’t do any of the work to get these age estimates.

Here is a google map pinpoint for the oldest U106 positive male (labeled Rise98) found in Lilla Beddinge Sweden. Listed as being from the Battle Axe culture and aged between 2275 and 2032 BC. It was interesting to find a U106 sample in southern Sweden, but I think everyone in U106 circles was just happy to find one in Europe. So far U106 samples in ancient DNA have been hard to come by and age ranges are all estimated. 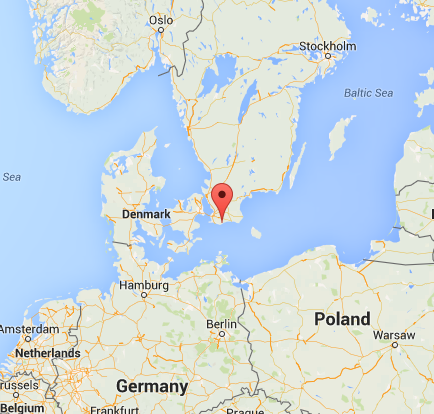 It would be somewhere in this time period that Z18 also appeared on the scene. Here are a couple of nice maps of Europe between 2500BC and 1500BC from timemaps.com: 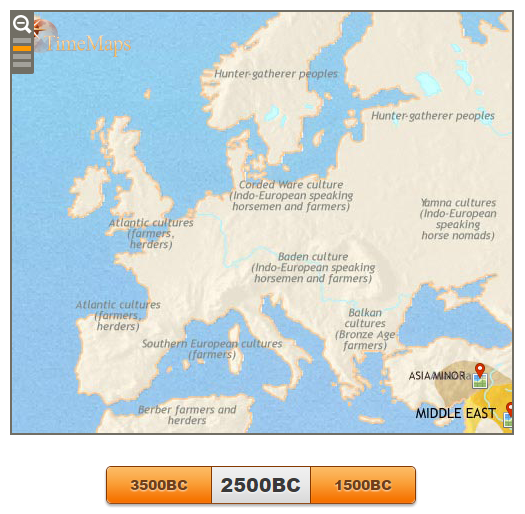 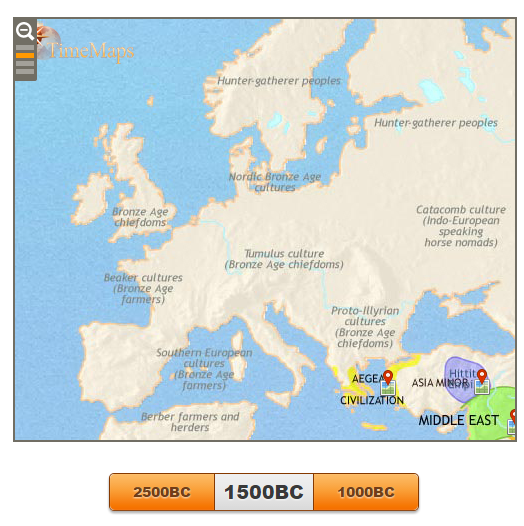 In 2013 I was looking at a world map for Z18 that started around 1000BC. Today I’m looking closer to 2200BC. That puts the origin point in time for Z18 not very far from the origin of it’s parent U106 (estimated at about 2400BC). So the two maps above pretty much cover that ground.

I’m going to diverge a bit further from the comparisons I made in 2013.

Then I did a pretty broad comparison for the different groups with some migration patterns that seemed to fit them. With time, come new results.

For instance, when I looked at the East Anglia Cluster in 2013 it was easy to see the movements of the Anglo Saxons. It probably doesn’t negate that movement but they have widened their scope to include someone from Sweden and Poland in their ranks, making their range similar to the Cumberland cluster.

When looking at the current age ranges from Big Y tests for the different SNPs that define the East Anglia Cluster, Polish Cluster (which contains two men from Switzerland) and the Cumberland Cluster, they all appear to crop up at about the same time right around 1300BC and then branch out from there.

The other striking thing (to me anyway) from the Big Y testing was that, so far, these clusters seem to branch right off the root Z18. Time and testing may change that but so far, these clusters seem to be in their own silos, independent of one another for a long long time. I had wondered if we would see some hidden ties to each other through big Y but that does not seem to be the case. Meanwhile, our much older brother Z372 and it’s child L257 have lots of branching and layering.

Each cluster has grown and added new locations and variations, their home ranges definitely overlapped at different points (especially in Poland it seems like), but they also seem somewhat more like lonely little islands of Y DNA that sat in a cold sea for about a thousand years waiting to break out. 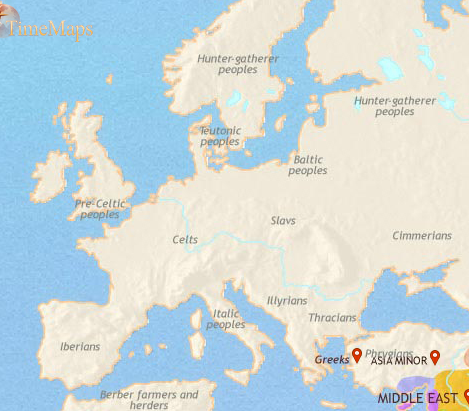 c. 1300 BC, the Indo-European cultures of Central Europe (among them Celts, Italics and certainly Illyrians) change the cultural phase conforming to the expansionist Urnfield culture, starting a quick expansion that brings them to occupy most of the Balkans, Asia Minor, where they destroy the Hittite Empire(conquering the secret of iron smelting), NE Italy, parts of France, Belgium, the Nederlands, NE Spain and SW England. (taken from the Bronze Age at Wikipedia)

Given that U106 was already in Sweden (at least visiting) a thousand years before this, I’m going to suppose that our Z18 clusters were hanging out with the “Teutonic Peoples” there, living the high life of the Nordic Bronze age. That’s a guess though.

Here is a pinpoint map of the Cumberlands that are 458.2 negative. They’re expected to be the slightly older group as one of their men originated the 458.2 and all the 458.2 plus men inherit that from him. You’ll see that I highlighted one there in Norway. That is a new testers since 2013. My old map skirted Denmark and only included the Netherlands and Germany on the continent. 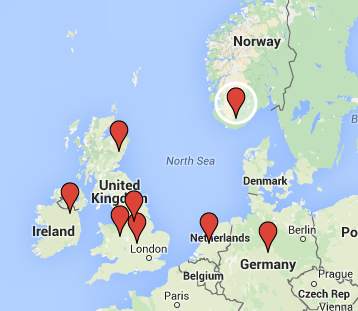 This is that same map with the 458.2 positive men layered in blue. Never mind the different shapes for a moment, just notice that their ranges are not that different now that we have more testers. The 458.2 negative men still haven’t broken into Denmark or Poland, but that could be a matter of time. As always, I notice that the child covers more ground and is more prolific than the parent. 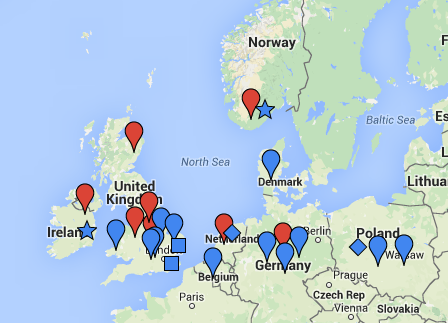 Now we can look at the shapes. For the moment there is only one 458.2 negative person who has tested Big Y and they haven’t shared their results. So we only have the information from the 458.2 positive men to work with.

Both 458.2 positive and negative are typified by DF95 and CTS12023, but no one is certain exactly where they part ways.

In that map the stars, diamonds and squares represent big Y tested Cumberland Cluster families. In Big Y testing all the 458.2 men shared 14 or 15 SNPs with each other, not shared by anyone else. Without any variation it’s hard to tell which came before what. The age estimate was based on a single SNP from that group of 15 and it was dated at about 1242 BC (not too far from the origin time of some of the other clusters). Also, the other Z18 big Y groups seemed to have long runs of common SNPs like this. To me that suggests either a bias in testing (not enough testers yet) or a pinch point where all of us are fairly recently (in the big picture of humanity) related to one man..whose buddies may have petered out. 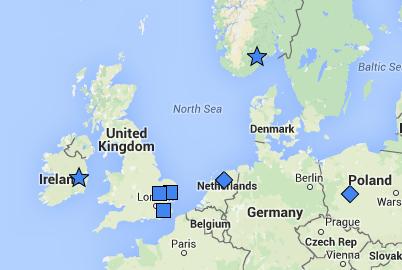 In the second map the blue star in Norway and in Ireland represent two men who leave the rest of the crowd right there at those 15 shared SNPs and go their own way. This split in the Cumberland Big Y is (for the moment) marking the oldest Cumberland Ys. Now we have a point in time and a couple of locations for a beginning. Although the estimate for the SNP was in the 1200s BC, the estimate for the date of a last common ancestor for everyone is much closer in time at about 250 BC.

The Blue Squares and Diamonds

What is interesting here is that (as luck would have it) we had at least two people from each group (squares and diamonds). Unlike the split for the blue stars where they just part ways, these two groups continue for several more SNPs each.

For the time being one group is hanging around the U.K. while the other is split between the Netherlands and Poland.  That second group (the diamonds) is very interesting because so many of the Z18 clusters contain Polish recruits.  In our cluster the Polish recruit splits off later (closer to us in time) than the recruit from Norway or Ireland.

You can see the tale I’m spinning here is similar to the one from 2013. I’m still thinking of a nice central jumping off point for all these people..maybe in that “teutonic peoples” zone. The Scandinavians are great movers of people and I’m still thinking we hitched a ride with them to the Netherlands and Poland and England.

It will be hard to wait for more big Y testing from other groups. Do the Swiss in the Polish cluster form their own group away from their Polish cousin? Is the Polish tester in the East Anglia group older than the others or younger? How about their tester from Sweden? What do the other Cumberland cluster Polish testers look like? How about the 458.2 negative tester from Norway? How does he stack up to the 458.2 positive Norway tester? Where does the 458.2 guy from Denmark fit in?

Big Y has the power to answer so many questions…for a price. Looking at all the new information coming in, I’m sure a revision for this one will be necessary in a matter of months rather than years.