Although you have to question your mental health when reviewing how much time and effort you put into genealogy, I have not been more aware of my own perception change in a long time. Today, the results for my Elmer Y DNA recruit down the Ed2 line were revised. I wrote about his results and my interpretation of them last time.

Today, while comparing the results for another Elmer tester, I noticed a difference in the genetic distance from my recruit to me. Where there was a GD of 2, now there was 1.

His odd mutation at GATA-H4 had been wiped away and the more standard value of 10 put in place of his 9. 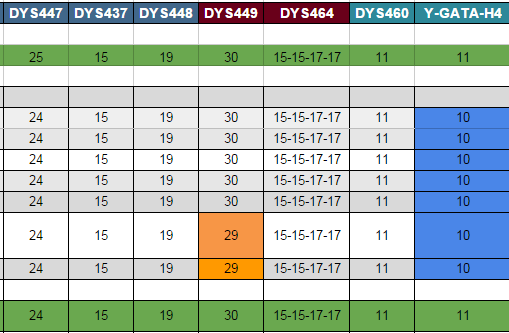 So now he shared the non-modal value of 10 there like the other Elmers and I, but he still carries my mutation of 29 at DYS449.

All of that means that I have my closest ever Y match. My interpretation of his results discounted his GATA-H4 value, because it was so different from the others. So really, nothing has changed about the match in my eyes. It’s still my closest match because of that shared mutation at DYS449. I feel it is the most likely candidate for a paternal line for my branch of the Thompson family. It’s still my best bridge between the Elmore family in Illinois and Edward Elmer in connecticut.

Psychologically though, over the course of the day, my perception has changed about the match quite a bit. In my own mind it went from the most likely match to an absolute match. Dangerous ground for a person who is most often wrong, but still there it is.

Now this minor change has me thinking the autosomal match to the Elmore family is better than I thought. More solid. Like the one paternal segment and unknown second segment in that ATDNA match are, all of the sudden, an excellent sign post rather than a vague possibility. Even though it really says nothing about those results at all, it has me feeling degrees more hopeful that I’ve done this bit right and my gamble has paid off.

Still though, optimistically, I feel certain that this Y result means I am related to Hezekiah Elmer 1686, son of Edward Elmer and Rebecca Fitch. Certainty is not something I’m used to.