Now that I have many maternal and paternal segments worked out I thought it would be good to put up some graphics of the general map. Again using Kitty Munson Cooper’s segment mapper utility to get great visual representations of the segments using my dad as the base person.

To be clear, this won’t represent all of the matches for my dad, just those known to be maternal or paternal right now.

Here are his Seelye Campbell and Beadle relatives along with other known “found” maternal matches. 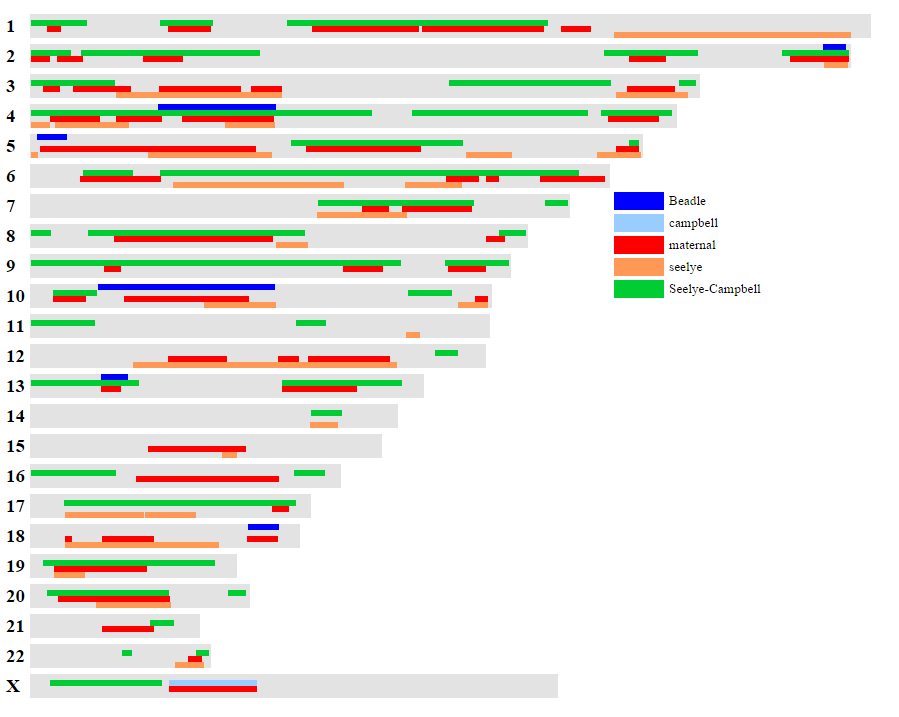 Blue is a Beadle only relative. Light blue Campbell only. Red various maternal genetic relatives. Peach Seelye side only (would include the Beadle family DNA too). Green Seelye Campbell which basically represents everything Seelye, Beadle or Campbell.

You can see I have lots and lots of coverage with multiple maternal relatives, sometimes matching each other and sometimes going off on their own, but I benefit from having so many maternal only relatives to check against (up to and including my dad’s maternal uncle there in green).

Here is the condensed version of that map. All maternal matches. 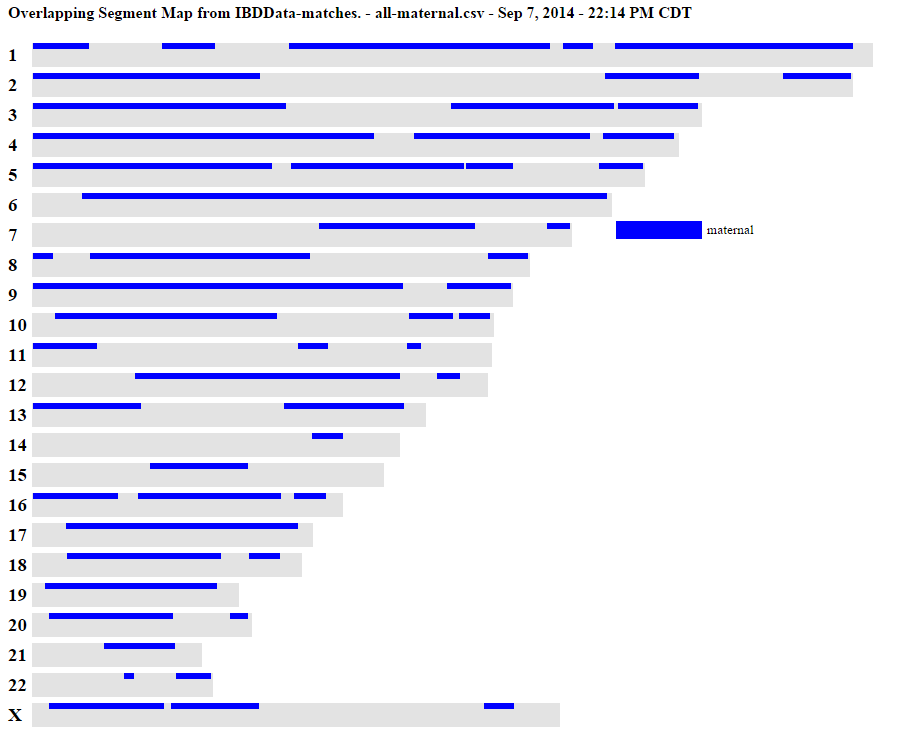 You can see there are some gaps, but with all those layers of relatives tested, we’ve filled in quite a bit. The X is all maternal, but those are the matches available which is interesting. Because of this coverage it is much more likely that I can place a match as maternal.

It’s good to note here that the kind of coverage you see in the consolidated maternal map required four people at various distances to get tested.

Here is the one known paternal relative on our Finks side along with various paternal matches: 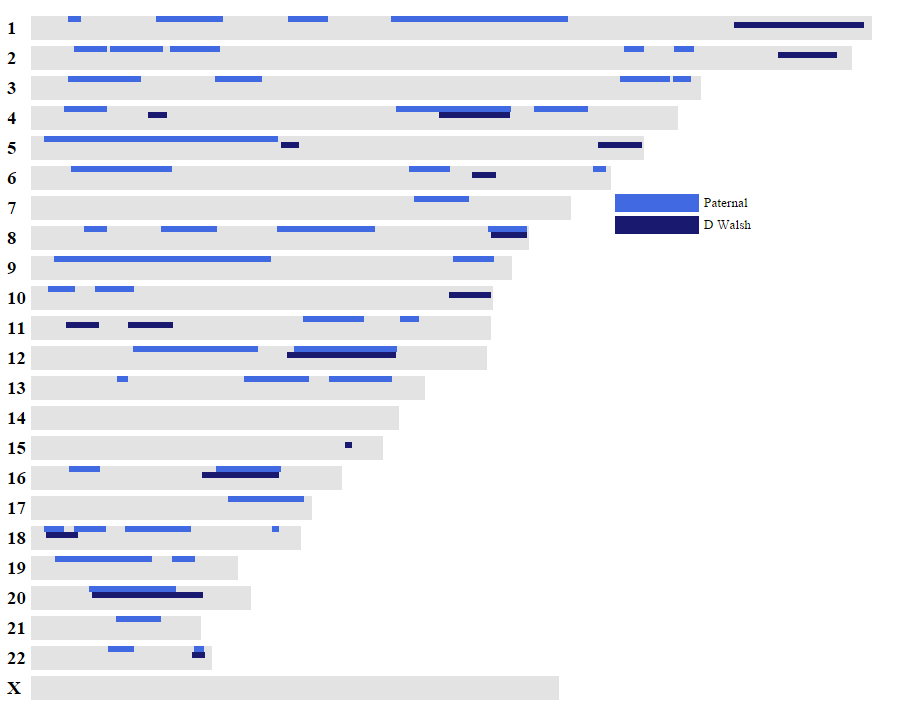 Light blue is anyone I’ve determined to be paternal. Usually because their group of matches does not match a known maternal group. Dark blue is the known Finks relative, sometimes illuminating unknown paternal matches and sometimes breaking new ground. 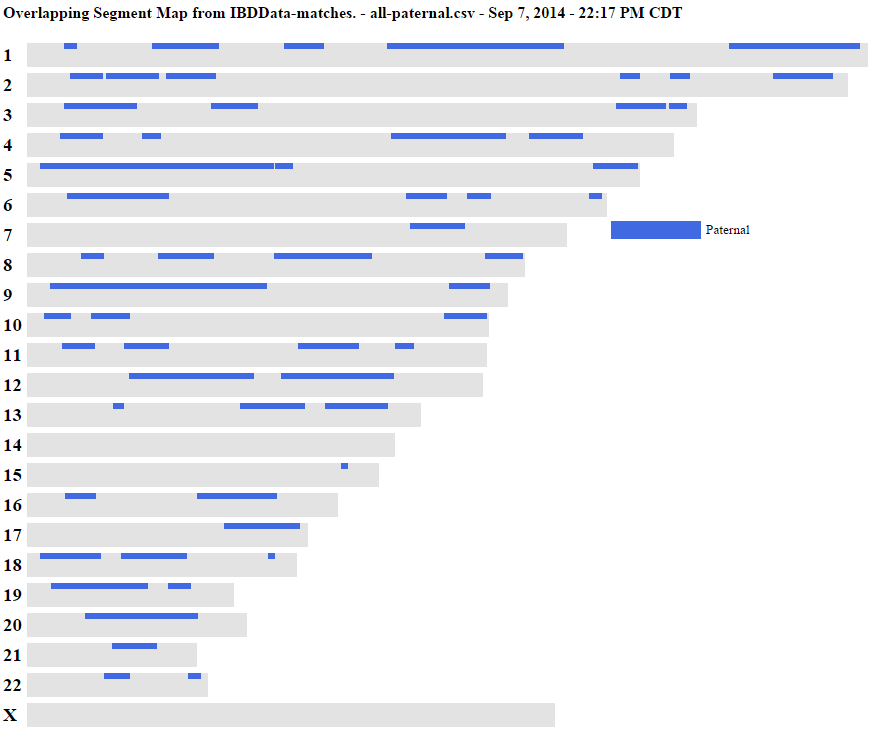 Here is the consolidated version of that map, all paternal including the Finks family. You can see that even though I am using the shadow cast from my dad’s maternal matches, I am still struggling without closer known paternal relatives to test. My grandfather had no siblings and my attempt to fill in with our Thompson cousins did not show any matches, so there are more gaps to fall through on this side of things.

That may sound bitter, but I’m not. I am exceptionally grateful for my Finks family tester. I’ve learned a lot since getting those results back from FTDNA. I think doing this kind of analysis is just opening my eyes to the value of testing multiple known relatives on the same side of a family (assuming you can’t test your target person..in my case my grandparents).

Here is a map showing both maternal and paternal segments as they overlap. It’s a great display that shows what I’m missing on that paternal side. 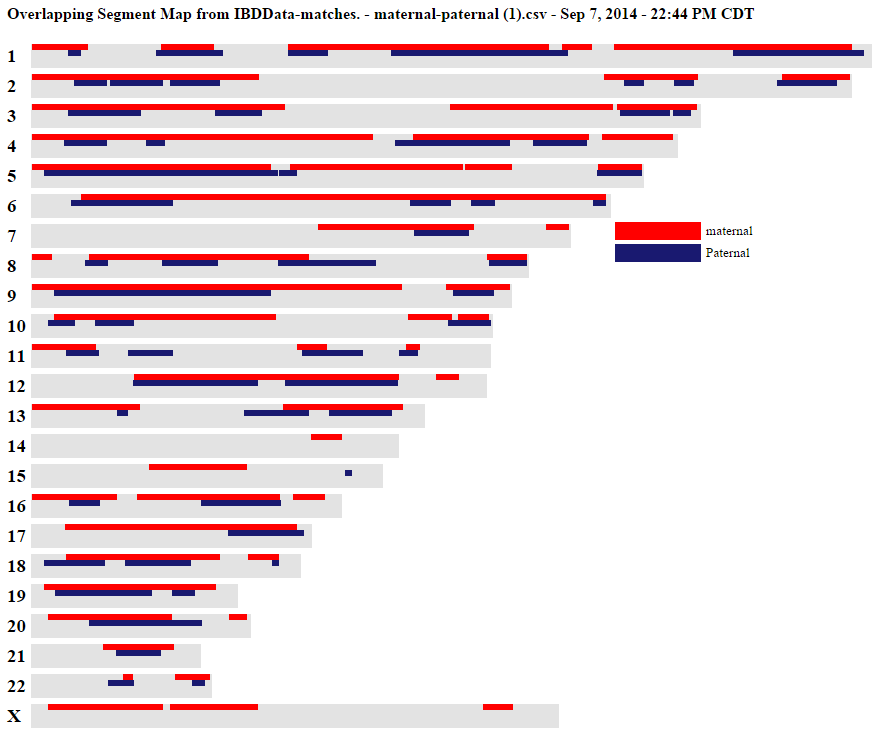 In this instance, red is matneral and blue paternal. Paternal matches aren’t breaking tons of new ground here, probably because the maternal coverage is so good. In many cases, it’s not that I wouldn’t know a maternal match from a paternal match, just that no paternal matches have come in.

You can see some of that in the maternal chart above that shows the breakdown of known Seelye side relatives compared to organic “maternal” matches found at 23 and me and Gedmatch. In that chart red is just maternal “found” matches, while the other colors (peach, green etc..) are the tested known relatives.

Without those known tester matches the map is even more bleak and for the most part, I would have no idea which side of the family a triangulated group of matches was on. So thanks go out to the “knowns”!