The results are in for my grandfather’s Finks cousin (his cousin through his mother’s family) and I took a few minutes to look at the tools in FTDNA for general analysis. My Origins is the tool FTDNA has for this. It’s the broad overview of your genome with some hints on geographic location. Since this is my first FTDNA kit, I don’t have a good feel for comparing this tool to the results from 23 and me’s ancestry tools, other than that the results for my grandfather’s cousin seem pretty similar to my dad’s (except maybe a bit more middle-eastern or central asian than I would expect).

Here is a pic:

A nice map with some highlighted colorful areas. Very similar to the maps I’ve made in the past. My grandfather’s cousin has a higher portion of Scandinavian DNA than my dad, but she has some more recent scandinavian ancestry on her father’s side (her mother is the Finks). Western and Central Europe is to be expected I think as well as British Isles which she would get from both sides of her family. I’m uncertain on middle eastern or central asian and how they might tie in.

For comparison to my dad’s results, I ran her through DIY Dodecad and the Oracle too. The Final admixture proportions are pretty similar to my dad.

The Oracle results are also pretty similar with a little shuffling at the top. CEU (explained as white people from Utah) still on top, her Orcadian..etc are scoring a bit differently, but overall things seem to be in about the same order. Her family, taken as a whole has more immigration more recently from Europe, but I imagine the proportions are similar to adding up all my dad’s more distant immigrant relatives, not to mention that they share one full set of my father’s great grandparents. I am not too surprised that they are very similar people genetically.

One final analysis for admixture. I looked at the world results to see if there were small traces of Native DNA. I recently posted about the possibilities that our family story is true and that Telitha Hibbard is not really a Hibbard at all, but half native. This cousin would share Telitha Hibbard’s DNA as Telitha was her great grandmother.

Here were the Global 13 results:

I don’t really know how to read the southwest asian except to say that it might relate to the Central Asian segments FTDNA was picking up on. The Amerindian levels seem fairly low and of course FTDNA did not pick up any of that. I know sometimes DNA from Asia is a stand in for Native DNA, but I’m not sure how that plays out.

In Comparing the coverage of my grandfather’s cousin to my dad’s DNA, I had to rely on Gedmatch.com. Because my tests are from two different companies, a third comparison company is required. Similar to how I checked my dad’s Seelye relatives. I was able to use Kitty Munson Cooper’s segment mapper to make a great graphical representation of the Gedmatch.com comparison data: 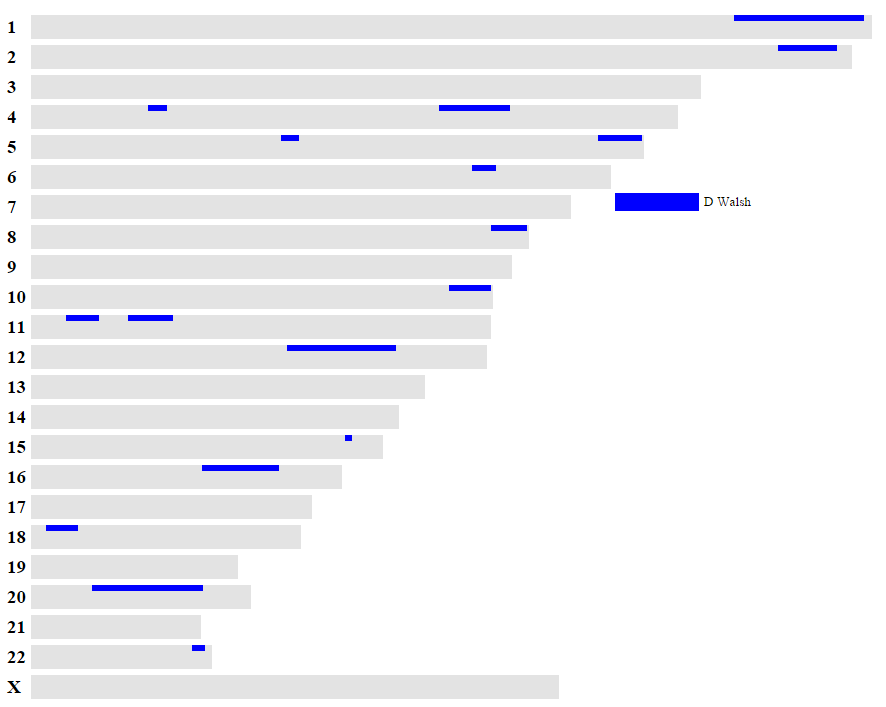 Overall, my grandfather’s Finks cousin here covers less ground for my dad than my grandmother’s Seelye cousin did. 396cM compared to 446cM on the Seelye side. Interestingly for me though the sharing is reversed when my dad hands down these matches to me. I share 259cM with our Finks cousin and only 162cM with the Seelye cousin.