Having just bought a Family Finder test from FTDNA for my grandfather’s maternal Finks Cousin and having a nice long phone call with her to talk about the kit, I decided to go back and look at the Finks family records again to get a handle on things.

The mythology among people related to the Finks and Hibbard family is that Telitha Hibbard, my 3rd great grandmother who married William Jackson Finks is half native. There are a lot of these stories in the U.S. People say all kinds of things to explain differences in people. My dad and I don’t carry more than a 0.1% amount of Native DNA. So probably within some margin of error, not even as much as we carry for African DNA.

I have generally disregarded the story because I was able to find Telitha’s dad and see the marriage records for her parents. Her parents, Mortimer G. Hibbard and Philicia Jeffries (Jeffers) were married in April of 1845. Telitha was born around 1845..nothing firm there, but nothing real out of the ordinary either.

Like I said though, I kind of looked at it with new eyes after this phone conversation. I’ve been really picky about getting the details of my great grandmother’s whereabouts in the lead up to my grandfather’s birth in 1925 since I received the test results back from the U152 Thompsons.

Talking with this cousin about a family photo of the Finks at their farm and specifically talking about Telitha Hibbard and her sister Hannah..well I had to wonder if there wasn’t something to it. They are obviously related women I think thier noses are strikingly similar (something that appears to have been handed on to Robert Sanford Finks) but they are also very different looking from each other too.

Here is the caption I found with the photo: From Far left; Robert Sanford Finks, William J Finks, Lily Finks, Telitha Finks, Susan Short (Telithas daughter from first marriage) ,& Earl Vivian Finks. Bottom from left: I think this is Minnie,(she would have died a few years after this pic though1870-1895), Hannah in Pic, and Ethyle Elnora (Nora).

Hannah Hibbard in the picture was William Jackson Finks’ wife. After she died he married her older sister Telitha Hibbard (who had also been previously married). 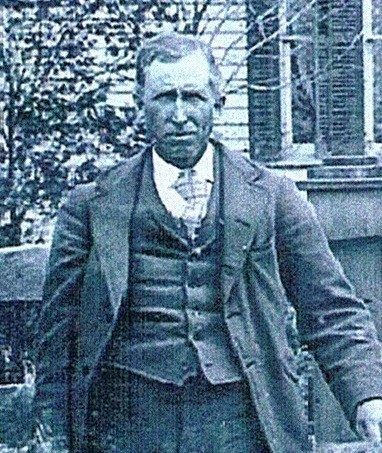 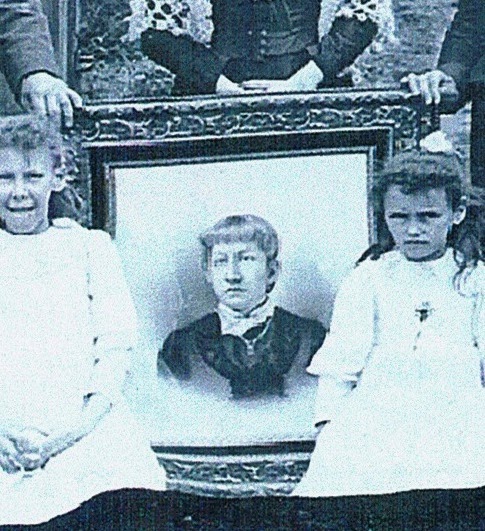 Hannah Hibbard (Markley from a former marriage) in the photo 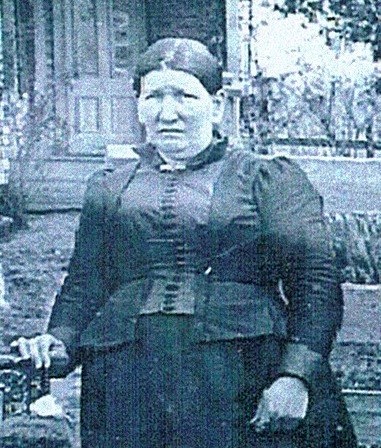 Okay, so “Looks like” evidence is the worst kind of evidence. I will give it to the story tellers, she does look darker and obviously has dark hair and some different features from her sister, but I’ve always thought about how different siblings can look from each other.

In my new eyes review of the evidence though, I found something striking. A death certificate index for Telitha Hibbard that gives a birth date. She is the first child of Mortimer Hibbard and Philicia Jeffries, but she is a bit too old for to match up to that. She was born in January of 1845 and her parents were married in April.

I’ve seen a lot of people who are married and then have children born a few months later and the assumption is that they were making it legal. In this case though, Telitha was several months old when her parents were married.

Now that is unexpected. Where was Philicia Jeffries in 1844?

Her parents, William Jeffries and Anne Jett were married in Fauquier, Virginia and moved to Washington, Kentucky. Philicia was born in Kentucky but married Mortimer Hibbard in Illinois where his family had located from Ohio (and Vermont before that). William Jeffries died around 1823. In 1830 I find his wife Anne Jett Jeffries still living in Washington KY, but in 1840 she is in Edgar Illinois. I don’t know what brought her there, but it put Philicia in range to be in Illinois in 1844 when she was (as legend would have it) “kidnapped by the natives and returned pregnant” with Telitha.

The battle in the Finks family is not whether Philicia was kidnapped and returned pregnant, but by which group of natives.

That could be the case, surely the area was in some turmoil and had seen a lot of warfare between the the many various factions of French and Illinois natives, traveling Lakota and British and U.S. and Great Lakes nations. It’s a big jumble there. It could also be that Philicia was involved with someone and it didn’t work out and she moved on. Hard to say. People make things up and sometimes they don’t and still other times they make parts of things up, but there are grains of truth.

In any case, I don’t think either random kidnappers or people who willingly (or under force) moved to Oklahoma and Kansas in those years are going to be good record keepers.

Still, since I have some record of Telitha’s birth and it seems off, the idea that she is Hannah Hibbard’s half sister is more likely to me than it was even a few months ago. Telitha would basically be Mortimer’s step child who he adopted. It’s unlikely she would have had a last name of her own.

That makes it extremely unlikely that I will find the Hibbard family through DNA testing…they simply are not there or should not be there. So the great leaps I made a few years ago in finding Mortimer Hibbard’s parents and his family from Vermont will not shed light on genetic matches for my dad or my grandfather’s Finks cousin.

Through genetic testing and documentation I’ve been able to sort of dismiss these stories as fable. I placed us in the great “Wannabe” tribe in the U.S. of blue eyed natives, or in some group that was afraid of it’s eastern European, African or unknown Roma roots and had, maybe, picked a better story. I kind of shut the door on it. Even if it were true, I would never be able to figure it out.

Do I reconsider those matches whose grandparents or great grandparents come from reservations in Oklahoma or from Kansas with a native background? Can I comfortably and smugly dismiss it as coincidence anymore?

I suppose in this instance I’ll have to follow my leads as best I can and keep an open mind. What I know now is that there is a discrepancy that makes it seem likely to me that Telitha is not a “Hibbard” but is only a “Jeffries”. Her father would remain unknown…but likely someone who was in the Edgar Illinois or Clark Illinois area in 1844.

The unknowns are beginning to overpower the knowns in my new-ish quest to define my grandfather.