As I talked about in three balls in the air and my Y breakdown post. I have been waiting for an autosomal match with my Indiana Thompsons trying to identify if we can find Ida Williamson in our shared DNA. I have a lot of autosomal matches that seem to float around the same locations as my Williamson family and many have turned out to be paternal matches for my dad.

The results are in. Of course this is where I’d like to announce that I’ve made sense of tons of matches and tied things up nicely with my Williamson family and at least half the people from Virginia and Kentucky..and well..that’s not going to happen.

Unfortunately or..maybe… fortunately depending on how you choose look at things, there is no autosomal match with my closest Thompson/Williamson relatives. I have a good idea of the size and scope the match should be, but there are no common segments.

Further, when looking at the ancestry finder csv file, there appear to be no common matches with other people between the two. It is an absence of data. That can be troublesome. It doesn’t really give a direction to go in. My hopes of finding common ground, even through an unknown adoption in the community, sort of went up in smoke.

I’m sure there is a probability somewhere that any two people who share a great grandparent will not show a match X times out of whatever..but our match already had some bumps in the road and this doesn’t really instill confidence.

So what is the up side?

I now have a good haplogroup for my Thompson family. R-U152. It’s a different branch of the Y tree from mine. Of course I was pretty certain that we were not a Y match and I had already let go of being able to find Levi through my Y since I have no promising Thompson leads.

This calls for a Y/Autosomal combo chart! 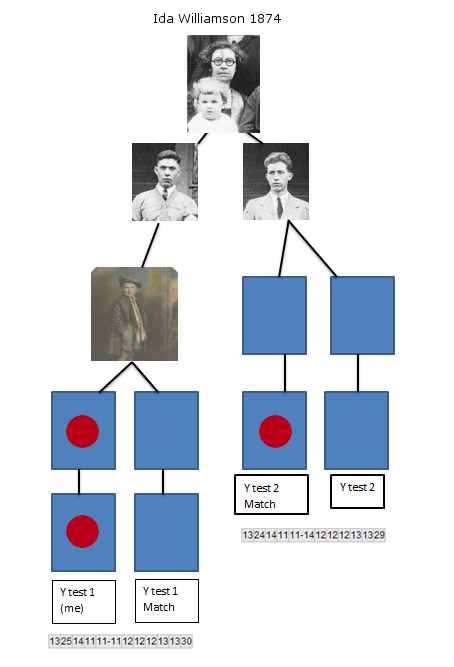 The divergent Y results are as shown in the last chart in Y breakdown for the descendants of Albert Thompson. Definitely two Y lines. The person I was trying to reach with the 23 and me results is Albert’s wife Ida. The red dots signify autosomal tests taken. My dot is worthless here because I can only inherit DNA my dad has in this scenario..but there it is anyway.  My dad in this scenario is the stand in for my grandfather (the dapper boy pictured). Y test 2 took a test to stand in for the autosomal DNA of my grandfather’s uncle Francis (the sharp looking light haired brother on the right there).

I cannot say that my grandfather is not the son of Ray Thompson, but it would mean that either Ray Thompson or Francis Thompson are totally unrelated to both Albert and Ida (Williamson) Thompson. That is an unknown. People are adopted sometimes from the community. I had hoped if there was some internal family adoption that the 23 and me test would show some level of cousinship, but at this time we appear to be completely unrelated people.

I have to go with what I DO know and put aside the question of Ray vs. Francis for the moment. I just can’t prove Ray the way I can prove Francis. Not enough data for that.

The R-U152 Thompsons, to me,  have good chances of matching with other Thompsons (looking at their early results). There are some similar R-U152 Thompsons out there. Since I can get them further back in time on the Y than my own branch of the family, they also hold more hope of finding relevant autosomal matches. My dad has no Thompson cousins..so in that regard, I am dead in the water and stuck on my grandfather’s paternal side.

My next steps with the U152 Thompsons will be to attempt a 23 and me test of the other Thompson cousin to play off the results of the first tester. Where they match each other will represent their shared set of grandparents. One of whom is a child of Albert Thompson and Ida Williamson. Using what I’ve learned following my dad’s maternal family we can try to eliminate variables to identify Francis Thompson in that mix and through him reach Rosa Blades and Levi Thompson along with the Williamsons and Maynards.

I will also need to test their Y to 37 or 67 to get more definitive matches for them. That may prove to be the best way to get Levi by himself. Like I said, there are other U152 Thompsons in the Thompson DNA project so it looks promising to me.

On my end of things..it turns out, I have a more diverse family than I thought I did. I feel free to seriously and more closely look at the Elmers and follow my branch’s R-DF95 Y results with them. It’s a great big world and lots of things can happen.

Autosomally, for my side of things, I need to focus on defining the paternal Finks family and the maternal Campbells in my dad’s results to eliminate variables and get a good direction on my new unknown. Do all the Kentucky and Virginia AT matches belong to the Finks or are there other players in other branches there?

I owe it to my Indiana Thompson family to follow through and take the evidence for them where it will go. Hopefully to Levi in Butler PA and beyond. I also owe it to myself to puzzle my own branch of the family out and see where that trail leads.

If my family members are still willing to put up with my nonsense, then I will be working a lot of different angles and paths in the future.

The descendants of Levi Thompson are proving to be as hard to nail down as the old man!