To help explain these Y suggestions, I ‘ve made a different Y chart coming from Albert Thompson. On the left you’ll see Ray Thompson, my line with my grandfather his only son. Middle is Francis Thompson confirmed by Y tests from his two sons and on the right is Cuba Thompson and a blue marker for his only son (or at least the only son listed in his obit). 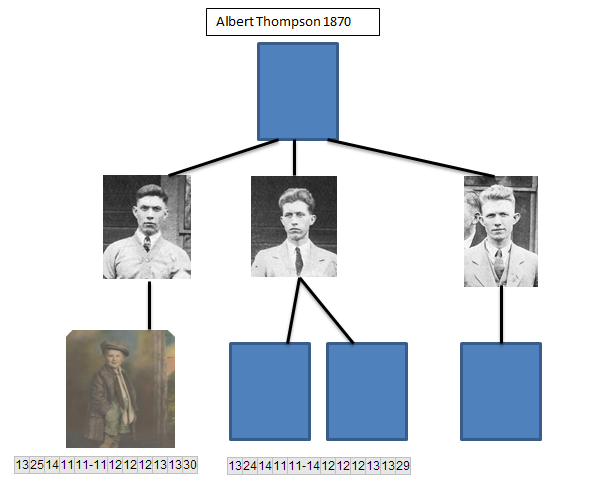 Three major Y suggestions have been given to me, regardless of any further 23 and me testing.

One is to extend one of the lines of Francis Thompson to at least 37 markers, which would be the counterpart to my 37 marker test. The “Francis” Thompsons are WAMH. That means they match most of Europe without regard to haplogroup and could fall under multiple possible matches under a thousand surnames. So testing them out to 37 markers will hopefully give them better matches.

Two, I need to find a haplogroup for the Francis Thompsons. I know I’m down U106 to Z14, but they could be anything. A haplogroup will help define who “can” be their match. If they turn out to be U106 then someone in P312 is not a match (and vice versa).

Three…this one is harder. Find a living male descendant of Cuba Thompson to test. Harder because I don’t know that there are any. In 1978 his obituary says that he is survived by his son Jerry of Anderson Indiana. I think Jerry was likely born around 1931/32 to Onda Harris, he’s listed as Gerald in the 1940 census, but not much more than that. I don’t know if Jerry ever married or had children, only that he may have been in the Anderson area in the 1970’s when he was in his 40’s..then again maybe not. “Of Anderson” can just mean someone was born there. I would need to order the obituary of his mother to see if he is listed there, possibly with grandchildren of Onda, to know if there is anyone alive to contact.

Why Y test Cuba’s possible male line? Well, because it would verify Albert, which was the intention of Y testing the lines of Ray and Francis in the first place. Having a nice Y match going back to Albert will solidify things for the Thompson line and there would be no more male Thompsons to test at the level of Albert as Albert’s brother James died childless.

Option 2 could partially be covered under an already agreed to 23 and me test. A Y haplogroup is defined in that test and it would kill two birds with one stone for $99 as it would also tell me whether they share a match with my father consistent with a common great grandparent. Further SNP testing could follow at FTDNA to refine their haplogroup.

Option 1, likely the most expensive test to refine the Y from 12 to 37. It’s most likely to give us a good Thompson match though, hopefully getting us past Levi (father of Albert) and would set the bar for a test of Cuba’s line.

Option two would be the easiest to accomplish financially and technically because a tester is already lined up and it’s less expensive than the Y refine. The broad haplogroup defined at 23 and me will help place Francis Thompson in the Thompson Y DNA project too while we wait for the funds to bump them up to 37 and work on Cuba’s descendants.