I used 23 and me for my autosomal DNA testing. It’s whole chromosome testing vs Y chromosome testing. Even though my main search is for someone who should be on my Y line, if you think of it like the census, you usually find a Thompson by identifying their family members. I am a Thompson and a Seelye and a Nunn and a Blades etc..

Once you’re tested you are presented with matches. What you need from a match is exactly this:

At 23 and me the contact process is painful because they want to protect customers who are there for medical research. So if someone does not choose to be public, you can see almost nothing about them except maybe some surnames (good luck there) and their Y and MTDNA haplogroups (both useless here because you can’t match on them). You can also see a rough percentage of match and maybe number of segments and a bit of an idea of what level of cousinship they might be.

Neither of those two things you need from above are available without contact.

If they do choose to be public sometimes they may have a tree in their profile and then you could see that, but nothing of the chromosome match which is crucial for making sense of the randomness. 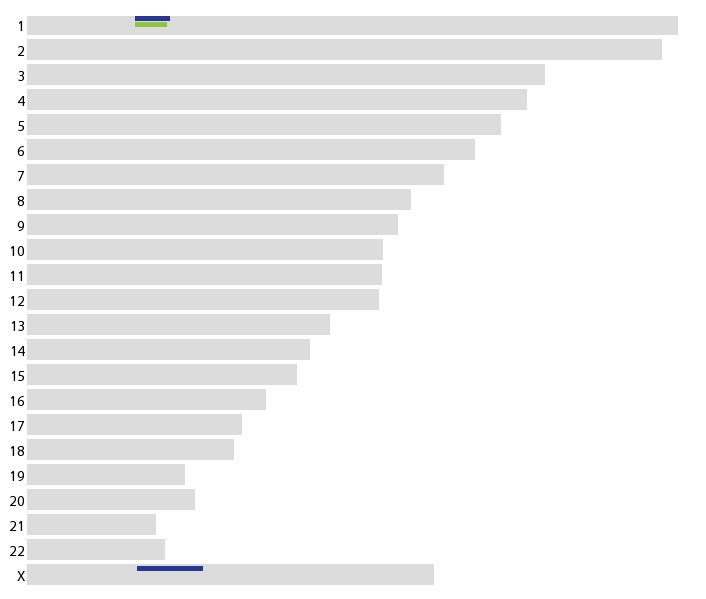 That is a genetic match to two people. One is a known relative who shares Daniel Abbe and Esther Nunn (both born around 1800 or so). You can see them as blue, they match on chromosome 1 and the X chromosome. My dad gets his X from his mom and sure enough there is an unbroken line of moms back to Esther Nunn and back down through their other daughter to the man my dad matches with. That unbroken line of females is important to the X. Women get an X from each parent, but men only get the one. In this case the X and the chromosome 1 match may come from either Daniel or Esther or both as it was recombined in their daughters.

The little green bar is a match with a person who does not yet connect to Daniel Abbe and Esther Nunn in her tree, but now I know that she likely should be in their tree, probably from a shared ancestor farther back in time from them.

I know that because she shared genomes and I can compare her to my known match and compare them to each other and see that all three people match in the same spot for the same amount and length. That segment there in blue and green came to us from a shared ancestor we may be able to identify.

So to be at all successful, you need both those ingredients. Without them, it’s a hopeless task and because you don’t get any of it without asking..it’s a crapshoot.

The amazing thing is, I don’t really always need participation. I only need those two things above..genomes and trees.

If you do get a person with a tree who is willing to share genomes, then you can START figuring out who they match with and where a common ancestor might be. Then you can begin to do the thing you actually signed up for.

I count myself lucky to have several people willing to share and what’s more, I’ve also got people that are eager to work on it too. Those people make everything worthwhile. They are shining examples of hope in the face of certain doom.

What is most painful about it is the time spent just to get to the point where you can TRY to find a matching ancestor. It’s not easy. You have to organize and coordinate and communicate with people who really don’t know you very well. It’s like herding cats and the system is constantly working against you by not making it easy to communicate and track communications.

Sometimes you get lucky like with Daniel and Esther there, but most of the time it’s a side shoot of a side branch or a vague location match. Even with everything in your favor, your work is cut out for you.

In the next post I’m going to put up my father’s list of ancestors by cousinship. Most people will not have this many surnames. Many people (like myself when I started) may not know their grandparents real names. What it will illustrate is the problem with my own tree that I see everywhere.

In this area, we’re pioneers. There isn’t a set protocol for these things. We’re all doing the best we can and really those people who fall by the wayside are doing what they can too. I imagine in the future this will be old hat, but for now it’s a lot of toil for those precious rewards and I have to be patient and hope everyone can be patient with me while we work this out.