One of the mysteries about Henry Williamson for me (besides the identities of his parents) is why, when he was no longer bound to the Beale family, did he go to Iowa to serve in the Civil War? I haven’t ordered his military records yet as I did with Levi Thompson, but I do have some documentation from the national veteran’s home and from his obits. He really did serve Iowa, and then move right back to Indiana to live out his life. 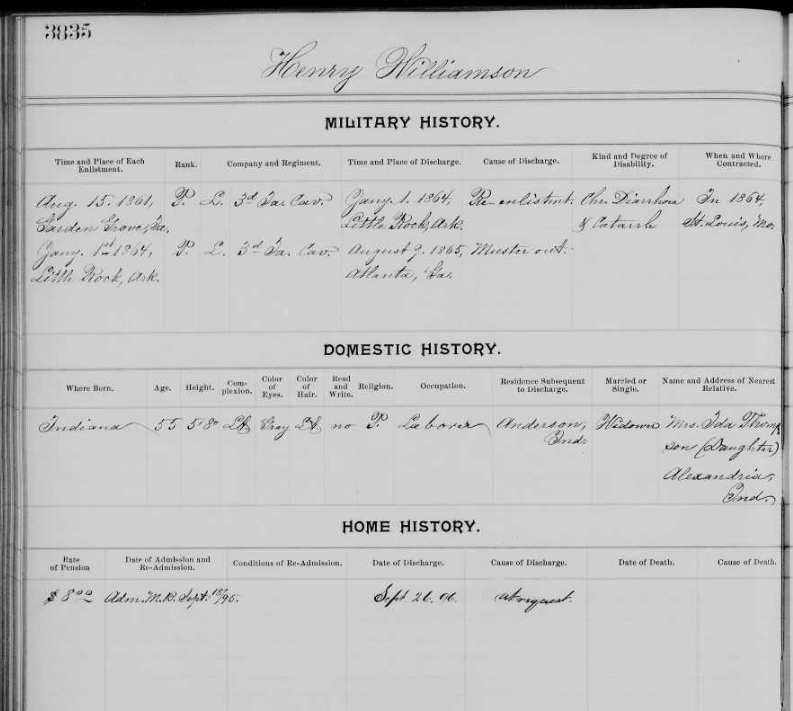 Here you can see his record with the home for volunteer soldiers with living relative Ida Thompson (my second great grandmother). In 1910 he is listed in the Census living with his daughter Maud R Williamson Griffin in Alexandria. The listing clearly says his mom was born in Indiana and his father was born in Kentucky (unlike the death record). Nothing  that would point me to a connection to Iowa.

What was he doing there? Did he have family in Iowa? Was it a random move just to get away? It’s hard to know without more documentation. This record shows that he enlisted in Garden Grove, but that doesn’t have to mean he lived there. Perhaps I can order his state records from Iowa to get more info. I also should make a better search for his pension records (assuming he has a pension from the $8 listed as his pension in 1895 and his pension certificate number 695421).