Here is the path to Rosa Blades through Albert Thompson husband of Ida Williamson:

I was specifically looking for documentation of the mother of Rosa Blades who I only know as Elizabeth. I was also looking for information on the two Susannas in Henry’s life, his wife and his mother. Here is the death certificate I have from Henry: 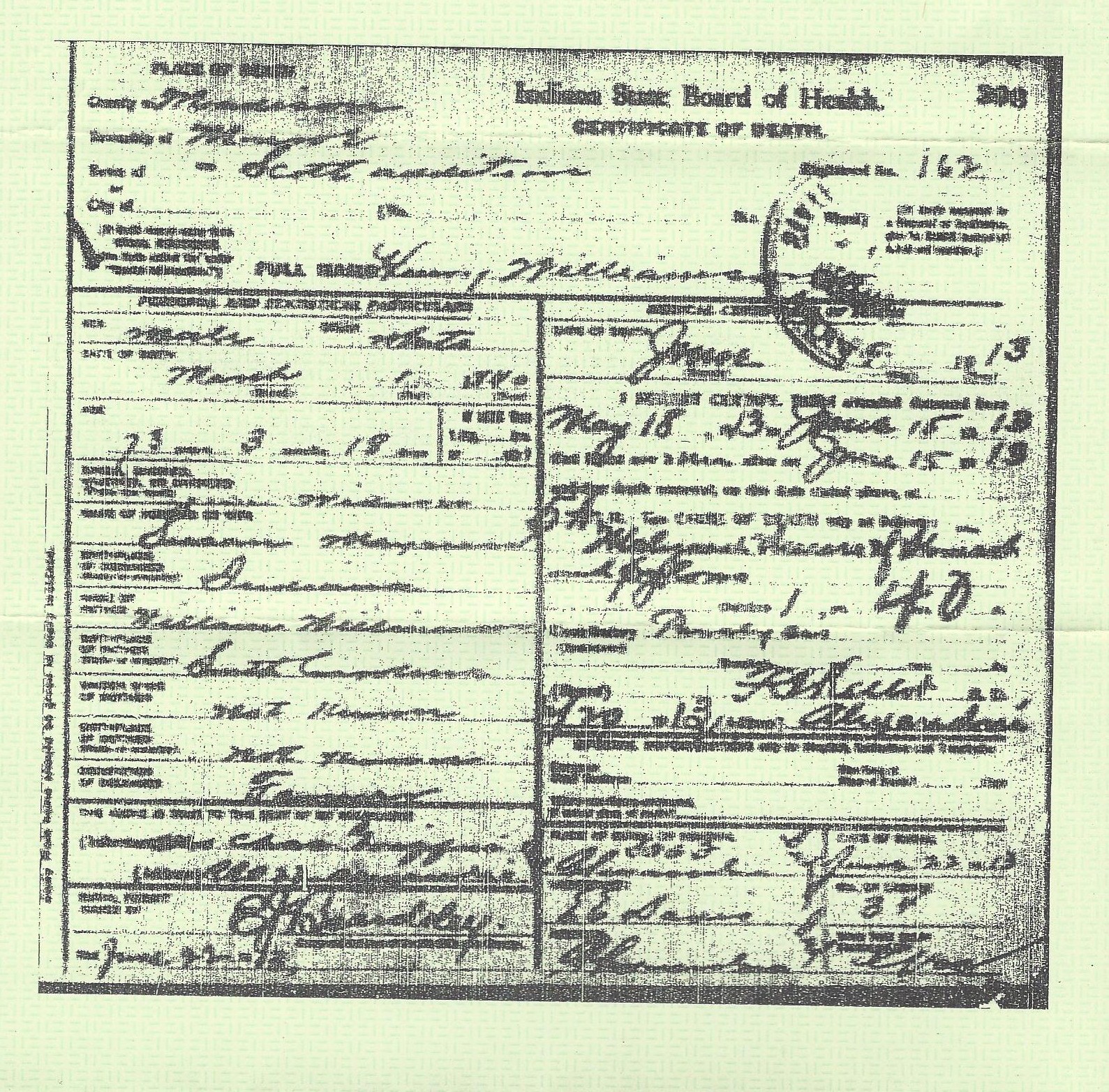 It came along with a warning that the paper was of a bad quality and that the scan was the best they could do. I was able to find an example of one of these documents online and tease out what it says.

His father is listed as William Williamson and it says he is from South Carolina. Which is odd because Henry, in 1880 says his father is from Kentucky and his mother is from Indiana. This fits with what I know about the Williamson family. Several of Haman (Hammond) Williamsons sons were born in and around Floyd Kentucky. I also have two overlapping autosomal genetic relatives at 23 and me with family history that goes back to Kentucky. One of them, has family members that live right near the Williamsons with Williamsons appearing in their official documents.

All of that evidence, circumstantial or not, leads me to believe that the death certificate is in error. Hammond Williamson does have a son William who is living with him in 1850 when Henry and his mother and siblings are listed by themselves, but Hammond’s son William is 10 years younger than Henry’s mother and of course still listed with Hammond in 1850 rather than with Henry and his mom.

Both of Henry’s parents would have been long dead before either Ida Williamson or her sister Maud were born. It’s possible they didn’t know who was Henry’s father or where he was born. Since Henry was bound out, there may have been very little tying him to the other Williamsons. The circumstances of the binding of the children is unknown to me and I’ve often wondered why they were bound out with so much family around. William Williamson does disappear before 1860, which is fitting because in the 1860 census Henry is already bound to the Beale family.

It could be that Henry’s children did not know anything about his parents. It could be that I have the wrong family assigned to Henry Williamson and that he doesn’t belong to the Floyd Kentucky Williamsons he lives right next to. What I do know is that several of Hammond’s sons disappear around the same time, which would create a glut of Williamsons without stable family lives.

Henry’s mother is listed as Not Known and Not Known. I know that her name is Susanna and that she was born in Indiana.

Susanna Maynard ties into the Maynard family and may explain why Henry’s mom and brothers are buried along with the Maynards in Holson cemetery. Henry may have buried them in his wife’s family cemetery. Henry is Susanna’s second marriage. Her first is to Reuben Nelson who was the father of her first set of children. In one census the Nelson children are listed as Williamsons, but that is corrected in later census records.

The Maynards are fairly well documented, in online trees there is a daughter Susanna listed who is born at the right time but with no death date. I believe that Susanna is probably very hard to track because of her marriage to Reuben Nelson and then to Henry Williamson. She would be a relative of Moses Maynard and part of the fairly well documented Maynard family…which also runs into Kentucky for a generation or more.

I had hoped this information would shed more light on some of my genetic matches but so far, there are no silver bullets there. Only implied ties to Floyd Kentucky and very old matches to relatives of Alden Williamson (ancestor of Hammond) which could be false positives.

Still I am further. Although I still don’t have a clear tie to the Swindell family pictured in the 1927 pic, I do have a tie to the Maynards that would explain some of the burials.