This first one is really interesting because it gives him a birth place outside of Pennsylvania which is unexpected. It also lists the Kelsay family (see set in stone) and gives more information about his life:

JOHN B. HOLLINGSWORTHRetired monument dealer, was born in Hudson County, Ohio, August 5, 1836. His grandparents were natives of Pittsburgh, as were his parents, William Hollingsworth, born June 5 181 1, and Lucinda, born May 8, 1814. William and Lucinda’ Hollingsworth were the parents of six children, namely: Wesley B., John B., Gilmore, Mariah, Isabel and William. In 1856 John B. Hollingsworth came to Fairmount Township with his parents, locating in Fairmount, then a village of about a dozen houses. The father opened the first cabinet shop in the Township, making household furniture of all kinds by hand, and supplying pioneers with coffins for their dead.

This is really neat because it gives information about his parents, saying they are from Pittsburgh. No Mention is made of their time in Butler PA. William Hollingsworth makes coffins, which translates very well into the related profession of tombstone manufacturer that Levi Thompson is in 1870. John B becomes a stonecutter instead of a carpenter.

John B. went to school at WhiteHall and also at Summitville. Hestarted to learn the carpenter tradewith his uncle, William Wellington,then living at Summitville, remain-‘ing with his relative about one year,then returning to Fairmount andworking at odd jobs until the springof 1861.


On April 23, 1861, he en-listed in Company K, Eighth Indi-ana Volunteer Infantry, for thethree months’ service, remainingwith this regiment until the com-mand was mustered out on August 6, 1861. He, with Smith Kelsay andIsaac Smithson, were the first three Fairmount Township men who at theoutbreak of war responded to President Lincoln’s call for troops. OctoberI, 1861, Hollingsworth enlisted in Company H, Twelfth Indiana VolunteerInfantry, serving seven months in this regiment. With this command hewas discharged May 18, 1862. On August 10, 1862, he volunteered for thethird time, enlisting in Company H, Eighth Indiana Volunteer Infantry, forthree years, or until the close of the war. The Eighth was mustered outJune 14, 1865. He was with his regiment at the battle of Rich Mountain.West Virginia, July 12. 1861. During his second enlistment his regimentwas on guard duty, being stationed near Sharpsburg, Maryland, guardingthe Potomac River. During his third enlistment he saw hard service withthe Eighth Indiana Infantry, participating with his command in the battlesof Blackwater. Missouri. Port Gibson, Champion Hills, Jackson, Big Black,Vicksburg, second battle of Jackson, Hall Town, Oppcquon, New Market.Cedar Creek and T’isher’s Hill. At Cedar Creek, on October 19, 1864. justbefore Gen. Phil Sheridan arrived to rally his deinoralized army, Hollings-worth met Harry Norton, who was then sick. Hollingsworth helped hiscomrade along as far as Norton was able to go. The Confederates had atthis point flanked the Union forces and it was a case of every man for him-self. Norton insisted that Hollingsworth go on and take care of himself,explaining, after much effort, that he was too sick and too weak, to go far-ther. Hollingsworth reluctantly left his comrade. The Confederates wereupon them. Hollingsworth wheeled around, fired at his pursuers as he re-treated, and took to his lucls. making his escape to the Union lines asbullets were “throwing up dirt all about him.” Norton fell into the hands
of the Confederates, and was taken to Libby Prison, where h^ died.

Now I know that William Wellington in Summitville (a township in Van Buren Madison Indiana) is John B Hollingsworth’s uncle and is teaching him to be a carpenter before the war. You can also see that Smith Kelsay enters the war with John B Hollingsworth.

In June. 1865, Hollingsworth returned home and for many years successfullycarried on a monument business in Fairmount. – On February 17. 1876, hewas married to Mrs. Hary Hall Hathaway, daughter of William and Han-nah (Stanfield) Hall, who was born February 11, 1844, in Fairmount Town-ship. To this union four children were born, namely: Martin L., Morton,Joseph B. and Sarah L., all deceased except Morton.

And here is the mention of the monument business and stone cutting that I am familiar with. So it seems like John B. Hollingsworth may be the source of Levi’s stone cutting after all.

Here is more on William Hollingsworth. Notice the bit about “undertaking goods”:

WILLIAM HOLIINGSWORTH, undertaker and cabinetmaker, Fairmount, wasborn in Chester County, Penn., June 25, 1811, and is the youngest of afamily of five born to William and Hannah (White) Hollingsworth.The father was a hatter by trade, and followed that vocation until hisdeath; he died in 1812, and his wife in 1837. The boyhood of oursubject was very like that of any other Pennsylvania lad of the sameperiod, and he early in life learned the bitter, but beneficent lessonof self-dependence, and soon took up the business of life in manlyearnest At the age of eighteen years he began to learn thecabinet-maker’s trade, in Pittsburgh, Penn. After serving hisapprenticeship he worked at his trade in different localities. In 1852he came to Madison County, Ind., where he opened a furniture shop andsalesroom of his own, which he carried on till 1869. He then moved toFairmount, where he conducts an extensive business in all styles offurniture and undertaking goods. He was married in Pittsburgh, Penn.,April 25, 1833, to Miss Lucinda Burges, a native of Pennsylvania, boraOctober 14, 1814, and died in Fairmount in the year 1881. Thefollowing are the children by this marriage : Wesley B., John B.,Gilmore, Maria and Isabel. The three sons served in the war of theRebellion. Gilmore, the third son, died in Fairmount in 1885. Mr.Hollingsworth is a member of the United Brethren Church. In politicshe is a Republican.

William Hollingsworth is said to live in Madison County and he’s from Chester County PA so this family has been on the move for a few generations.

Now I’m going to post an image from an e-book on Grant county that mentions the Kelsays, and John B along with his stone cutting business. The story is about John Montgomery who worked for John Hollingsworth and the Kelsay brothers who bought John Hollingsworth’s business: 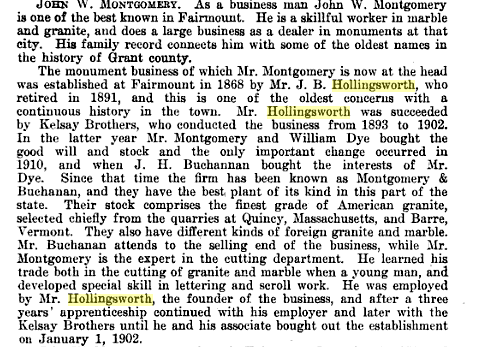 Why I find this exciting stuff is that it helps me put a timeline and frame in when Levi Thompson became a stone cutter and tombstone manufacturer. It also means there may be more to look into in Grant county and maybe something of interest in the Wellington family.
It gives me the idea that when Levi returned from the war and wasn’t fit to be a farmer, John B Hollingsworth gave him a job as a stone cutter. So chances are, Levi lived in Madison county but worked in Grant.
This final bit is about the Methodist Episcopal Church in Grant County. William Hollingsworth was a member of the United Brethren, some united brethren were Moravians but I think in this case it is a Methodist church and was probably the Unity Church in Grant County. William Hollingsworth’s children seem to be attracted to the Methodist church as I see familiar names like Isabel Hollingsworth among the congregation.
The Methodist Episcopal Church, of Fairmount, was originally or-ganized in 1 86 1. The first services were held in the old frame schoolhouse,* which, at that time, stood on the east side of Walnut Street,between First and Second.The charter members were William H. Broderick, class leader ;Agnes Broderick, Joseph Broderick, Martha Broderick, David Baldwin,Elizabeth Baldwin, Martha A. Wilcuts, Hannah Wilcuts, M. M. Masonand Anna Mason.In 1864 the membership had increased by the addition of the fol-lowing names : John R. Kirkwood, Phebe Kirkwood, George N. Eck-feld, Sarah M. Eckfeld, (Mary H. Moreland, Mahala Ward, Martha A.Smith, Thomas J. Parker, Rebecca Parker, John Shields, MarthaShields, John S. Bradford, Louisia Williams, Rachel Fankboner, SarahMoreland, Jane Knight, Delilah Hollingsworth, Wesley B. Hollings-worth and Isabel Hollingsworth.

Another family name really sticks out to me in this listing. I see there are Brodericks. They’re not the exact same Brodericks that Levi Thompson lives with in 1860, but they are a Broderick family from Grant Indiana, just like George Broderick (born in Grant) who lives with Levi.

All of this is just adding some cohesion to what I’m seeing in the census. How did these people come together? Maybe if I keep going I will find out why George Broderick and Levi Thompson name their daughters Frances (and probaby both Rena too). Was it a shared cultural item or a respected person in the community? Did they all attend the same church?

If John B Hollingworth is Levi’s friend or employer, why isn’t he a witness on Levi’s pension file? Did they know each other from Butler PA? Is there something for me to look into in Hudson County Ohio in 1850? Is Pittsburgh a stand in for Butler PA or are the Hollingsworths really from there? Who are the Wellingtons?

Lots of questions that could be pulling me closer to good answers or pulling me further away.