During the course of puttering around on various DNA related forums, I began a conversation with another Z14 person who is not in my cluster. In conversing back and forth about his Y STRs and mine I asked if he would check his DYS458 to see if he had a microallele there. For all I know it is common to every Z14 person…so why not check. Truthfully I had expected that he did have one.

Interestingly though, he did not. Meanwhile other members of  my cluster do have this microallele. To me it really gives validity to the clustering that has been done by the project admins. They grouped us without knowing that we shared this oddity simply by the strength of the pattern in our other markers.

Okay so what it means to me that there is another Z14 person who does not have a microallele on DYS458:

Since I’ve learned that you retain the microallele through mutations it would place the mutation that caused the microallele in a period in time after the SNP Z14 came into being. I’m not sure if microalleles are a one way street, but it seems that way from what I’ve heard. So for me  and the people I’ve contacted in my cluster who have the DYS458.2 it would make the timeline something like this:

I’ve seen the age of Z18 given as roughly 2000 years so Z14 is necessarily younger than that (although I don’t know the estimates of it’s age) and our shared microallele is younger than that. All it does is get you closer in time to the current date. To me that was exciting, because it really would be some sort of definition between Z14 people, creating branches in our tree and the possibility that there are SNPs that may follow these clusters that we don’t know about yet.

The second thing that came about during our conversations was that I looked at some of my values that weren’t as obvious at the 458.2 that I’ve spent so much time with.

We were talking about killer values at specific alleles. Values that almost no one shares. As an example I used my DYS463 which is 23.

Here’s an example of why this stood out to me. It has a lot to do with Ancestry.com’s presentation. The highlighted values with numbers are those that differ from mine. You can see that my GATAH4 is not incredibly popular, but my DYS463 is down right offensive to other mammals. 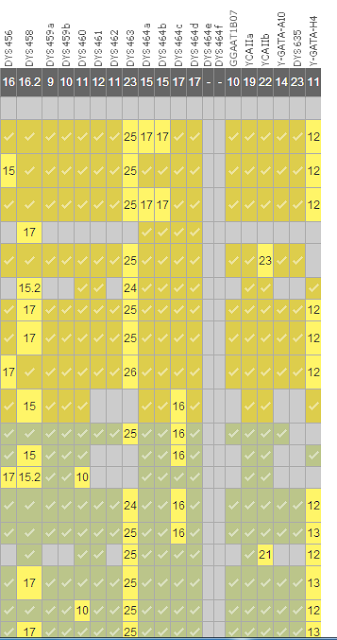 See it there DYS463 I have 23…nearly everyone else has 25. No one at ancestry has 23. I had never really put it together but my new Z14 person sure did. It’s right on the Z18 and subgroups page labelled

Apparently if you have a 25 at DYS463 then they are 78% sure that you’re going to come out R1b-Z18. So 25 is the mode for Z18 humans. It’s also the mode in my cluster at FTDNA where I appear to be the only person who does not have it. I’m also one of the few people who tested for it.That is why all of my ancestry matches seem to have this 25 value at DYS463..they are all also more likely to be R1b-Z18. I thought 25 was the value for all humans, but it turns out it’s a dead giveaway for Z18 status. So the irony is that I don’t have it and I’m Z18 positive. I am the odd man among my own matches.

It’s odd, but how odd can it be?! Well, there are some reasons I may not see other Z14 people with my 23. One is that you would only know anything about DYS463 if you tested at SMGF or Ancestry.com for their 46 marker test or ordered the 111 test at FTDNA.

According to SMGF 23 at DYS463 is about 8% of the population. If I take that as a rough guide and look at Z18 where 25 is the mode and I’m also in a smaller subset of the population that has a DYS458.2 then the odds of finding matches at all seem pretty unlikely.

So nobody at ancestry has it, and nobody at the Z18 group had it (of those that tested for it). Time to go back to good old SMGF and have a look. 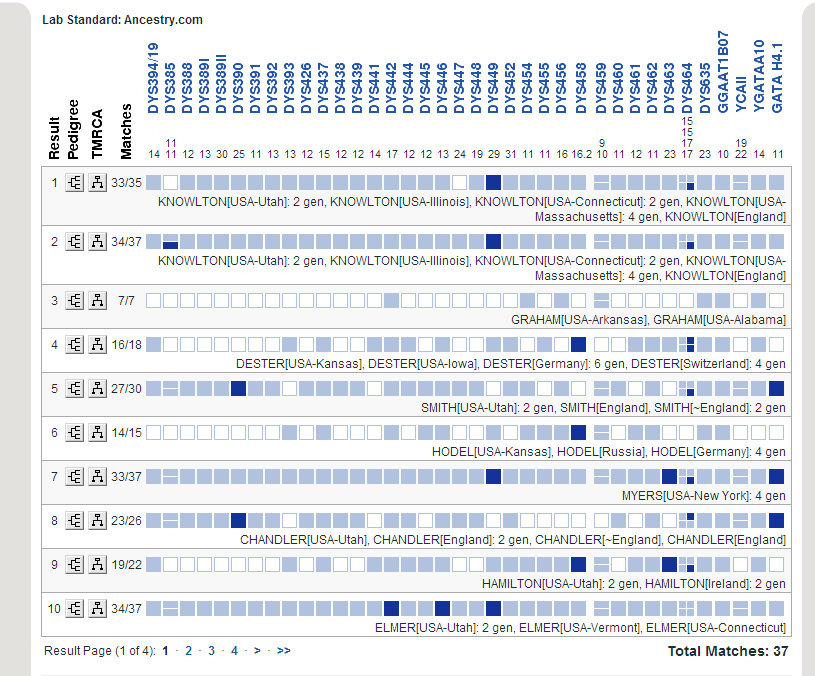 You’ll have to squint, but it’s there DYS463 is 23 and who do I share it with at SMGF? The Knowltons and the Elmer. Since there are multiple Knowltons and I also have Knowltons and Elmers at FTDNA, I would imagine this is a pattern for our families. SMGF is hard because it has no haplogroup information. There are others at SMGF who have the 23 like Dester from Switzerland, Nunn from England and Burke from Ireland (apparently the name is an anglo saxon name based on burg).

I couldn’t tell you who else in the cumberland cluster has it beside me the Knowltons and the Elmers, but I can say that the one Damron at Ancestry.com has 25 there. The Damerons share the DYS458 microallele, but not this really odd value at DYS463…or at least that is the case for the single Dam(e)ron test I have at Ancestry.

So to me that is exciting. if we had more 111 marker tests in our cluster it would be interesting to see who else in there has this. It’s also interesting that these two families, the Knowltons and Elmers have their roots in Southeast England and maybe even more specifically East Anglia?

It makes me more confident of the work that has gone on thus far and, to me at least, it strengthens the position of England on my Y line.

It also points out how valuable another set of eyes is, even when you may not be related for the last 1500 years you can still give each other a helping hand.