I decided to post yet another map of matches. These are my 25 marker matches at FTDNA and my lone 37 marker match along with several people at the U106 project who seem to follow my pattern of  DYS390 = 25, DYS385b = 11, YCA2a and b = 19 and 22. Within the spreadsheet for U106 those markers are enough to make the modal look like me and give my values for several other markers like DYS447 = 24, without even trying. Blue guys are people who match that self imposed pattern. Red are 25 matches, Yellow is the 37. London is unfairly represented because if people just said “England” I plopped them into London. I also plunked my Boettcher German FTDNA match in Neidersachsen based on House of Names. 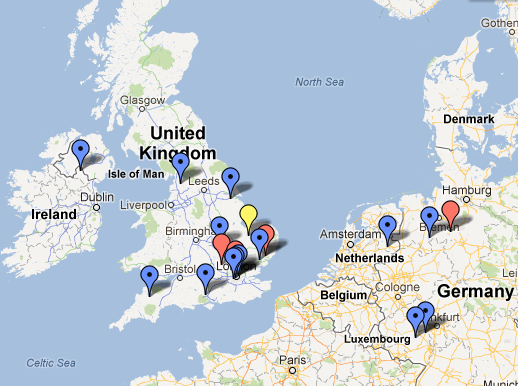 So this is why I’m guessing Saxon English for us. I should note here that even though my matches are English many have names that are assigned to Belgium by House of Names like Dameron or Huguenots like Pipkin. House of names is not the trusted source for all surnames of course, but it makes me think about my 23 and me matches to people with Huguenots from Ulster and New Paltz New York. Still, I have a much stronger showing among Germans as far as bulk goes so I’m left back with the most obvious Saxon conclusion until evidence to the contrary presents itself. My best guess, knowing what little I know is that we’re among some group of Anglo Saxons who made their way to England after about 400ad.

I hate to lose my Danish matches but I imagine we are just more distantly related to some common ancestor farther back in time.

Again, according to FTDNA, IF I shared a surname with that yellow Elmer we would most likely be related within the time frame of the common use of surnames in Europe. So, I think we’re talking about the 1100s on up. If we share a common SNP and still remain close at 67 markers..then I think the time frame would be much closer.

If there is a crossover, I suspect that it would happen with the Thompsons from New Jersey in the 1700s or the Thompsons from Braintree Massachusetts and farther back in Braintree England in the 1600s to early 1700s as both Thompsons and Elmers exist in those areas at the same time and at least in the case of the New Jersey Thompsons, definitely intermarry.

At a minimum, I think we and the Elmers are at least people from the same area, possibly from the same town and we’re definitely related because we share the U106 SNP. The only question left is WHEN are we related. Our common ground could be in England in the 1600s…or even farther back.

I have my doubts about “The Aunts” knowing this when they related to my father that we were “English” Thompsons. So much of what I’m doing is chasing things they may have already known, but I think if they knew we were secretly “Elmers” they would have related that as well. That leads me to think that they were aware of a family of English Thompsons here in the U.S. and that they had tied us to it, rightly or wrongly.

I am trying to be evidence based of course but I’m at the point where I can’t ignore the “English” story any longer. I’m not unbiased, I’ve been considering it the whole time, but I do remain skeptical of it on principle. I’ve looked at it, thinking there was a grain of truth, but I have to think now that it is just a truth truth. I also think most people would have accepted it at face value and moved on so I think I’ve done my fair share of homework on it. I may be coming to the wrong conclusion, but I don’t think after these past years, that I am jumping to it.

Since I can’t really dispute “English-ness” without better or further evidence, I should probably take them at their word and see what English Thompsons I can come up with. This is difficult. Irish and Scots Thompsons I can get by the bucketful. English Thompsons are a bit harder to come by right now. Among Thompsons anti-English sentiment is still running pretty high (after hundreds of years). I wonder if it was different when “The Aunts” were doing their search.

Time has moved on and things have gotten lost. I cannot go back to talk to them.