So my first Levi Thompson of interest in Ohio has some cool leads but one dead end. He’s got a lot going for him, some family names, location, a tie in with the Davis family, but he get’s shot down by appearing in the 1860 census in Scott Adams Ohio with his family. It’s really hard to put this one away though so I’d like to review the evidence I have against him.

You can see my two Levis of interest and one extra I hadn’t counted on. Next here is the same search in 1860:

Damn. There’s the Levi I was hoping would disappear…and he’s the only one I can find! How about the rest of the family: 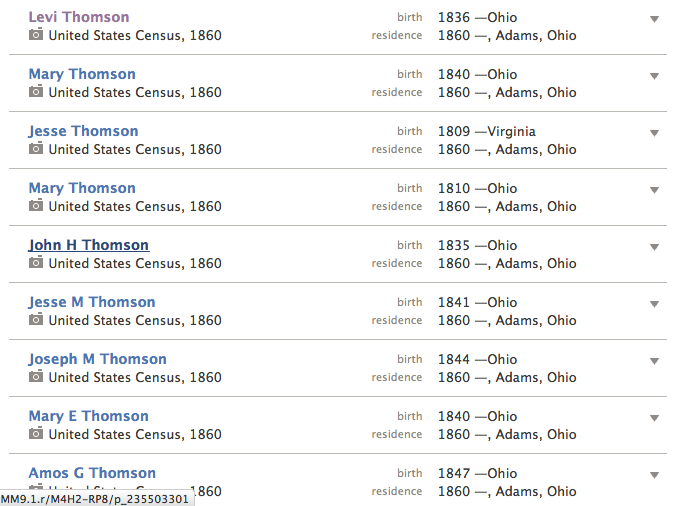 Not being able to actually see the census record behind it, here is what I have. Several of the Thompsons from 1850 indexed as Thomson by family search in the 1860. Levi, Mary, Mother Mary, Jesse, John, Joseph the invalid and even Amos all appear. So if this Levi were my Levi he would have to be in two places at once.
I know in the 1870 census this Levi is not with this particular family but I have no way of knowing where he goes or what he does. Here is where this gets really creepy though. If you remember my older post Levi Thompson alive in 1900? where I openly posed the question of whether my Levi had run off to Ohio and married a woman named Margaret only to die before 1910. I had thought he was a good possibility because he was a bit further east in Ohio…not too far from Celina.
Here is that Census record:

If you take a look at it you’ll see that this Levi I suspected of being ours is a Gun Smith and that his father was born in Virginia..like Jesse Thompson and his mother was born in Ohio..like Mary Thompson. He also lives in Washington Township, Highland, Ohio which isn’t too far from Scott, Adams Ohio.
So I think, although I probably haven’t found my Levi Thompson, I may have done a pretty good job of tracking this particular Levi Thompson…in a round about way…twice.
All the Levi Thompsons in Ohio sort of disappear in 1870. There is one dead Levi Thompson in Columbus, Ohio in 1873. Not sure who he belongs to. Since I know my guy is around in 1890, I can guess that it’s not him.
So I’ll keep this Levi in mind as I move on, mostly because of that Amanda Davis record..I still want to tie Levi to those Brodericks somehow..I can’t help it.
Next steps: