Searching through familysearch.org I found a Levi Thompson of interest born in the 1834 range. I’ve gotten in the habit of looking for any Levi Thompson born around 1834 because of the confusion surrounding his birthplace in the census records.

The reason I didn’t find him in earlier searches at Ancestry.com is that he is indexed as a 10 year old there while he is indexed as  16 year old at familysearch. He could be 10 it’s hard to say, but from the census record he appears to be 16 to me.

Here is that Ancestry Index:

So in this case it pays off to check with a couple of sources. I never would have found this Levi on ancestry because he doesn’t fit in my time range.

There was one other record..also from Ohio in Cardington, Morrow of a Levi Thompson who was 16. Both of these records are of interest because they contain a Mary Thompson. When I’m looking at family records I also look for repeating family names. So for instance I had to wonder about Levi’s daughter Mary and Levi’s son James. Well I think James is probably named after his maternal grandfather James Blades. So now I’m on the lookout for Albert, Mattie, Mary, Rena and Francis which seems to appear in the family more than once.

Mary Thompson is a pretty common name though so I’m really always hoping to find it in combination with one of the others.  Of course this family has two Marys which shows a pattern of Mary naming. Here is census record. It spans two pages:

Now the second page looks like Hary A Thompson but it is really Mary A. Thompson.
Here is the Familysearch.org index:

Here is the ancestry.com individual index for Mary A Thompson in the same family:

And the Ancestry indexes for Jesse and Mary (the mother):

No idea about Jemmima Thompson in the same town but you can see Jesse and wife Mary sandwiching Jemmima in the index.

So this got my attention. I have a Levi of the right time. He’s not born in Pennsylvania or Indiana but those are suspect because they’re inconsistent and because I just haven’t been able to find a record of him in 1850 in Indiana…yet. I totally missed this one before because of it’s index, which has been the pattern with my Thompson records.
So, okay, it’s worth looking into. Where is Scott, Adams, Ohio. It turns out it’s not too far from other known Levi Thompson locations. Here is a google map:

On this map. Point A. is Celina Ohio (a town close to Hopewell where Levi Thompson is listed in 1890 in a veteran’s roll. Point B is Scott, Ohio where this Levi Thompson lives in 1850 and Point C is Van Buren, Indiana where my Levi Thompson lives in 1860 with his wife and family.
Okay. Now, I’m extremely interested because this could go a long way to explaining what the heck Levi Thompson is doing in Ohio in 1890, but I’m stuck. My ancestry.com account has lapsed and although I’m free to search all I want, most records are closed to me.
Familysearch.org will show me 1850, but no other records. So what I really want to know is, does this Levi Thompson disappear from the 1860 record of this family. If Levi Thompson is still show living with the family in 1860, then it is less likely that he’s my Levi Thompson. Not impossible because the Silcotts appear in two different census records, but, unlikely. Except I can’t look at the 1860 records at either Ancestry or Familysearch.
So I asked for help from a newly met Thompson branch of my family, and they dug up the 1870 record for this family for me. It’s helpful because it gives a clearer picture of the family and Levi is missing from that picture.

It’s easier to read some of the names too. Jesse, Mary, John, Mary A., Joseph, Sarah, Amanda Davis and the last one looks like Amos Thompson. Now here’s the thing that got me really excited about this particular record. Who is that little Davis kid?!
If you remember from one of my earlier posts about Rosa, Levi and the records fire, Levi, Rosa and the kids are living with the Broderick/Davis family in Van Buren Indiana. I could not find a way to tie George Broderick or his wife Piety Davis to Levi or Rosa. The Brodericks live with a family of Thomases in Mill, Gates, Indiana in 1850. Thomas is a Thom name but it’s not exactly Thompson. I couldn’t find Piety before 1850 because in the 1840 census children are just tick marks. I knew she was from Ohio but all I have to go on are their marriage records and her really interesting name to tie them together and confirm that she is a Davis: 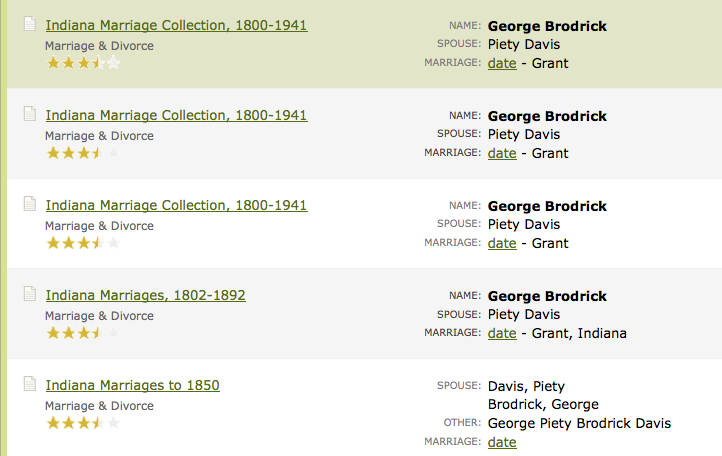 So I was kind of left to explain the Thompsons and the Brodericks living together as random chance.  But now I have to wonder if there is some deeper family connection between the Ohio Davis family and my Indiana Thompsons.
So it’s time for more research into the 1860s. Trying to see if this Levi Thompson from Scott Adams Ohio totally disappears from the Ohio records in 1860. It’s also good to note that there is another Thompson family from Pennsylvania in the same 1870 census sheet as Jesse Thompson. It looks like a Sarah Thompson with two children in her household lives just up the road from our other Thompsons. This could indicate a broader family group and bigger groups are easier to track.