So I’m waiting on 23 and Me now for that Y snp. I decided in the meantime to shore up some of my matches. This time I disregarded just the “top” matches and drew my list from those that shared the most markers in common…from 29 markers up to 39 in common. I pulled from Ancestry.com, Ysearch, Ybase, and SMGF.

For many of my matches I was able to get a better handle on their location because SMGF and Ysearch contain some family information in their results. So I was able to google the last known relatives for a few and get better information. Some though are still bald faced guesses based on world family names listings for most common locations.

Here is my most recent map. I was happy to place Elmer correctly in East Anglia. Corson is still kind of a mystery. They live in New Netherlands (New York) but they believe they are Swedish. They believe they stem from Caerston Jansen. Jansen is really popular in the Netherlands and Norway, but I know from my research with Thompsons that people change the spelling of their name to suit the place they live, for example SMGF matches me up with a Johnson who is really a Johannson from Sweden that anglicized his name.

Here is the 29 plus marker map. I had to short change the Ancestry.com matches because there are so many. As would be expected since we have the exact same tests. Customers from Genebase or FTDNA are at a disadvantage for matching me because SMGF/Ancestry tests different markers than they do.

I tried my best to place my matches from Prussia and Switzerland. My Custy and Bruemmer top matches are based on world family names ranking. The order of matching goes from highest solid yellow to lowest blue dot.

As I’ve said, my bet is Anglo Saxon or Viking..mostly because of these maps and the really scattered nature of my matches. Many are in England but not all of my closest. So my guess is that I match some dudes who get around. For kicks, here is a viking settlement map stolen from Wikipedia. 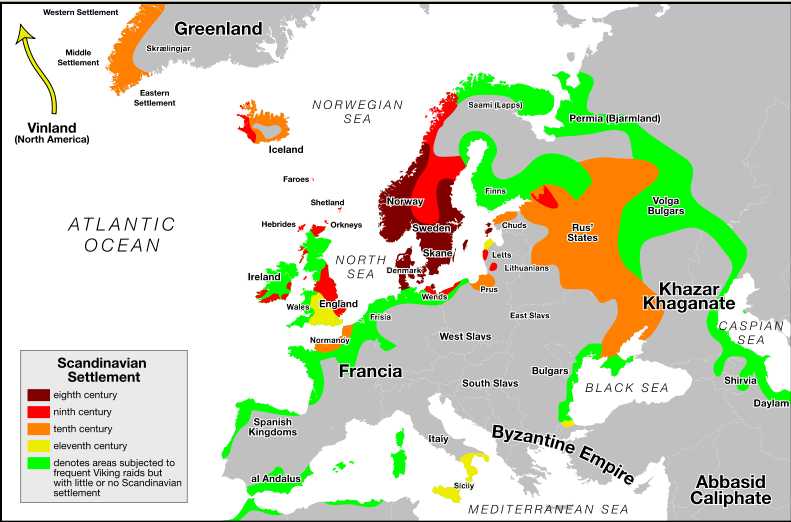 Of course there’s nothing firm to base any of this on and even if my SNP comes back U106 as I suspect, it won’t tell me much about whether there was a viking that made the rounds or hundreds of years of Saxon movement cause my map. Making maps of where people lived in the 19 through 1500s isn’t scientific proof of anything, but it is interesting to me.
Also for fun, here is another map of viking England in the 10th century.

At first I thought this was a pretty good match, but then I was concerned about my Knowltons in Kent. It turns out that the vikings were very active in Kent early on not far from Knowlton residing on the Isle of Thanet…which is apparently not an island…if the maps are correct. Also by the 11th century it looks like they have taken over all of Kent and Northumbria…home of the most Thompsons in England.

Here’s a closeup of Britain and Ireland:

My Irish matches are interesting. Most of them are R1b-U106 which is seen as an invader marker. Coen is definitely, and I imagine Custy is as well.
Over in Cumbria is a 34 marker match Hogarth. They are from Ireby which is picturesque. Cumbria is a borders area. Ironically Ireby is said to mean town of the Irish Vikings.
Down in Wales is a Thomas from Swansea. Swansea is a viking settlement in Wales. Thomas is my only Thom in this list and he’s at 29 markers. Also R1b-U106.
The one known L21 person here is placed in Bristol. L21 is like U106 but a different branch of the R1b tree. L21 occurs all over continental Europe, England and Ireland. For a long time I thought I might be L21 (probably wishful thinking on my part). Who knows though, maybe I am.
The waiting is the hardest part. Mostly I’d like to see if my logic is sound and if I’ve done my mapping correctly, or at least to the best of my ability. It’s been a fun distraction and a good enough reason to learn about northern Europe. It may also give me clues on finding the rest of my Thompson family. Maybe I should take those Danish Thompsons in Indiana seriously after all?