Picked up my ancestry.com account again as a Christmas gift and found an unexpected record for Levi Thompson in 1890. On ancestry the 1890 records are pretty dry and unorganized, but oddly that’s where I found him. Levi Thompson shows up in 1860 with his family and disappears after the 1870 census. I assumed he had died before 1880 given the injuries he had.

I found him in a veterans schedule in Hopewell Ohio. It doesn’t give much information, but it does say he has a disability of “stiff ankle” and that he has a post box in Tamah Ohio which is between Rockford, Mendon and Celine in Mercer County Ohio. As you can see on the map it’s not that far from Alexandria Indiana across the state line. 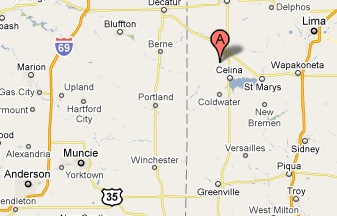 I’m not sure what he’s doing in Ohio at this time. His family is still in Alexandria in 1880, although he does not appear to be there. I haven’t found him in Ohio in 1880 yet either. In 1880 Rosa Thompson claims she is married. In 1900 she claims widowed. This makes more sense now than it did when I thought he died in the 1870s.

This raises a lot of questions. What is he doing there,  does he have ties to the area? Is that where he died? There is a union cemetary in Tamah Ohio, but find-a-grave only lists one gravesite. Luckilly they also have a picture of the graveyard and you can see that there are multiple headstones.  Could that be the final resting place for Levi?

As another point of interest, Emily Thompson Silcott’s husband is also gone in the 1880 census and Emily is listed living with her mom in Alexandria. Oddly she is also listed in 1880 in Muncie Indiana with her daughter Nina and husband. That tells me that there was some turmoil in 1880, although I don’t know what it is.