So these should be people who match with me at a really basic  level and then have the added benefit of a 16.2. Any or all of these could be freak mutations, but many of these also seemed to have other numbers I wasn’t looking for in common with me like YCAIIa and b being 19 – 22  and DYS447 = 24. Also a noticable amount of people had the DYS385b = 11 which is usually a killer.

I could only do this search on ancestry.com and SMGF because only they allow for 16.2 to be displayed. Genetree masks the actual numbers, FTDNA displays 17 for these people and Genebase appears to display 16. So if this is an important number, most people won’t know it.

So here is that map: 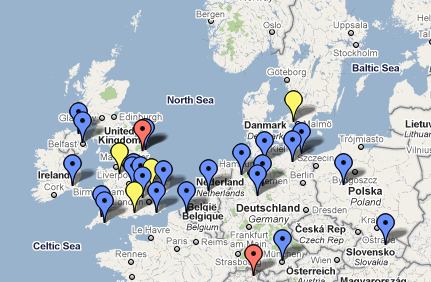 Some positions had to be total guesses because the people themselves don’t know, just like me. Many though were pretty well educated on where they were from and I could get a lot from their pedigrees. Again I tried to colorize my closer matches but right now the colorizing is incomplete because SMGF only displays the numbers you searched for. So I don’t have the actual ranking for the SMGF people, I’ll have to go back and look at them individually to see where they fit.

For kicks though I compared this map with a map of Germanic migration as it met the Roman empire. The scale is off but you get the idea:

The German migration map doesn’t contain later migrations to England because it was part of the Roman empire. Many of my close matches are in Britain which makes me think they’re most recent but the Peterson from Denmark isn’t totally alone as I’ve shown on other maps. It could be that that is my true “line” or it could be evidence of even more recent migrations within the last 500 years or so of Scots and English back to the continent (assuming we’re Scots again).  Also not every marker on this map has the benefit of TMRCA since all the SMGF records are missing that info.
At the present time though (given the limited nature of the results), it would seem to me that people who look roughly like me with this one really strange marker have followed a migration path of Germanic peoples west into England and Ireland at some point in time.
It’s also good to note that if FTDNA and Ysearch displayed DYS458.2 results, this map could be totally different.