Owning the bad guy. Here is the digest version of what is a huge and complicated history.

Okay, so if you’ve followed me this far you know that my first forays into what it meant to be a Thompson led me to Ireland. Specifically Northern Ireland in the mid to late 1700s and early 1800s.

The Red hand is kind of difficult for me. My only reference to it is of a nationalist symbol of oppression by the Northern Irish against the Republic. I do realize that it is a much older symbol and has it’s base in Gaelic culture and the Ui Niell, but for some reason it’s tainted for me.

Ireland was a surprise to me.  Neither of my trees led to Northern Ireland as we know it today or the Plantations specifically but they did lead to Donegal and Cork. Since my mother’s family self identifies Catholic Irish (Murphy) it was especially “interesting”.

It turns out I was mistaken and those family trees I built are wrong. They were good trees for their people, but they turned out to be bad trees for me. Now I’m stuck in Indiana or Pennsylvania in 1834. The odds are still in favor of us being Irish, but there’s no paper trail that takes me there anymore.

Most Thompsons from Ireland are from Northern Ireland which is part of the U.K.  So if we’re Irish, we’re most likely Northern Irish. Most Thompsons came in a few waves of Northern Irish and Scots that left those places because of years of drought and threat of starvation or to escape persecution. They may have been England’s war dogs in Ireland, but they were not allowed to be full citizens or hold office or even get government employment unless they denounced the Presbyterian Church and took up the Anglican Church..which many would not do. At one point the Queen of England nullified all marriages performed by Presbyterian ministers. Which was a great insult to many.

Here in colonies in the 1700s the Irish were not welcome to land just anywhere. Only certain colonies would let them in. Pennsylvania and North and South Carolina were among those. Pennsylvania and the Carolinas were actively recruiting Ulster Irish to try to solve one of their problems…the Natives on the frontiers.

So here again, we’re the bad guys. Because of hundreds of years of constant warfare with the Irish the Ulster Irish were highly militarized and perfect to settle in the mountains and woods of the west. They usually poor, probably uneducated, and didn’t bring much with them, but they were allowed some religious freedom in return for being the front line in fighting with the local Indian population. So we Thompsons were probably some part of winning the west..or the midwest as it is now, but our home base would have been Northern Ireland.

As I researched a bit of what it means to be Ulster Irish, I learned more about the Plantations and the Ulster Scots and the Borderers. Thompsons are one of those border groups that helped make up the plantations. In Ireland, we’re the bad guys. The red hand of Ulster. The North Irish who voted to stay with England. We’re the oppressive squatters choosing to stay with the English rather than join the new republic.

Thompsons of course are also in groups that already lived in Ireland before the plantations. Playing the odds though, it’s still in favor of us being “Ulster Irish” or even just Scots or English borderers. So our home base would then be moved from Northern Ireland back in time to Northern Britain. It doesn’t get much better there though.

Having lived in constant warfare between the English and Scots left the people of the borders in limbo. Each belonging to a government that was too removed to do much good. The border reivers lived in a sort of lawless tribal area. They may have been “English” or “Scottish” depending on who was conscripting or buying them into what army, but their real allegiance was to their clans and their borders neighbors. 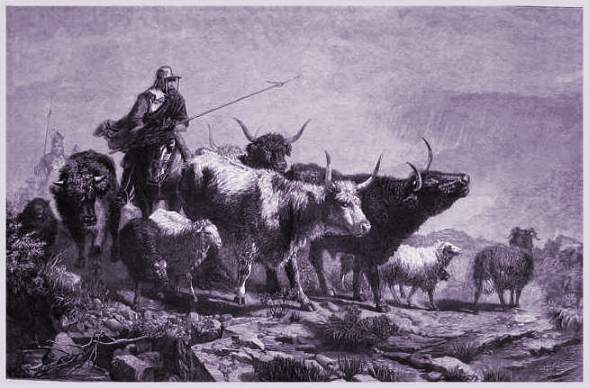 Thomson is associated with the West March of the borders along with these other families:
Scott, Bates, Little, Glendenning, Irvine, Bell, Carruthers, Graham, Johnstone, Jardine, Moffat and Latimer.

Information on Thom(p)sons on the Borders

When searching for genetic matches I do see Irvines, Bells, Grahams, Scotts, Wilkinsons, Reids and Littles crop up. Not many, but some.

When thinking of Border Reivers, It may help to imagine Pirates only put them on horseback. These families were such a problem that they were cursed by a Scottish Archbishop for all eternity.

Again, I’m playing the odds. These are not set in stone because I have no paper that says so. Most likely, we’re borders English or Scottish and part of a Reiving clan who then were planted in Ulster to try and settle that area ending up “more Irish than the Irish” and then because of religious persecution or starvation moved to the U.S. where we were installed in the western fringes of society to fight the indigenous population. Bad guys.

Where does that leave us…So we’re Border Reivers the scourge of both the English and the Scots and other border clans as well. I could have left it there and left well enough alone but Genetically I’m seeing a lot of people I don’t think I should see…normally. For one, I don’t see other Thompsons. I do however see people from all over England and into Denmark, Norway, Sweden, Germany and even Switzerland and Northern Italy.

I’ve been mulling that over for a while and I’ve come up with a group ( a couple of groups really) that would explain that and today I think I’ve gotten what I was looking for. An explanation. Some official word that would tell me why, if we’re Celtic Scots and Irish all these Northmen keep showing up in my lists?

Today in conversation with Genetree. A company associated with Sorenson Genomics who did my testing for ancestry.com I was told that if I have 16.2 for DYS458 and I’m R1b1b2 then I’m predicted to be R1b1b2a1a, S21, U106. Predicted is the key word. Again it’s playing the odds. Just because they haven’t found 16.2 in R1b1b2 outside U106 doesn’t mean it doesn’t exist. The only way to know for sure would be to test for that SNP.

In England it’s about 20% of the population. In Ireland it’s about 6%. Other hot spots are Netherlands 35%, Germany, Austria, Switzerland, Denmark, Czech Republic and on down from there. It’s a huge branch of R1b, considered to be about 25% of R1b as a whole. For some reason, I’m light on matches in the Netherlands, but I’ve got some people popping up in most of those other places. Some are just as close as my English/Scottish matches.

So that, paired up with all my maps and bumbling around means I’m probably related to this guy:

Yep. It’s Darth Vader.
These guys are the classic bad guys. They make movies about how bad these guys were. These are the guys King Arthur died fighting! Nobody loves these guys!
It could also mean these guys: 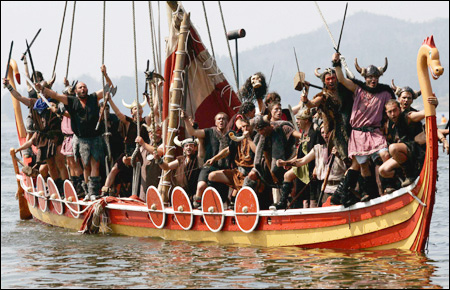 The Vikings. They may be worse than the other guys, but for some reason people like them better. It could also be these guys: 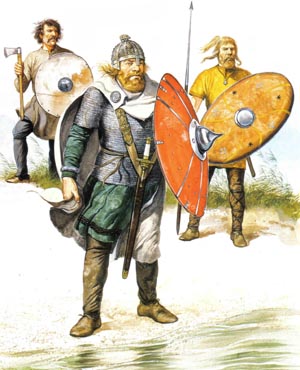 The Frisians. Who the hell are the Frisians? Anyway you’ve seen the map before, but here’s a viking map and I think it’s a pretty good general idea of where we’re talking about and sort of coincides with my personal maps of DNA matches. It also goes a long way to explaining the really spread out nature of my matches.

That map sort of makes the Western Isles and Dumfries matches make sense along with Cumbria and Northumberland, Manchester and East Anglia. 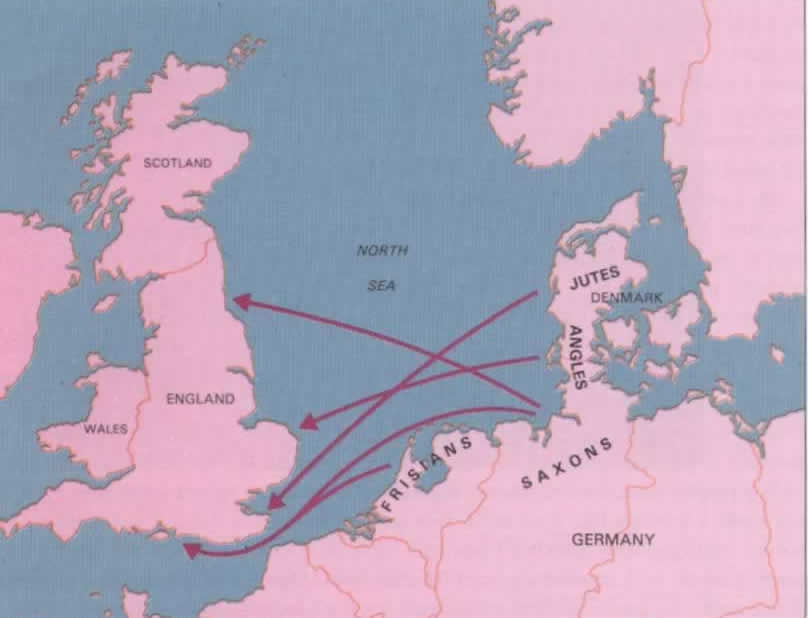 This map is helpful too. It explains many of the matches in Germany around Westphalia (Saxon homeland) and my matches in Somerset and Dover and why they’re all spread out and again why there aren’t many of them. So far I think Genetics has a really hard time telling an Angle from a Frisian from a Dane from a Jute from a Geat so my specific background could be among any of them.
Bad guys. All bad guys!
I will submit this one argument in defense of my DNA though. It may not be as evil and invadery as genetics companies might have you think. It could be just as Celtic and Indigenous to Britain as any other. Many people are making just that argument and there is no invasion necessary for regular continental migrations to equal today’s populations of U106 in Britain. It’s also good to remember that the Belgae were in Britain before the Romans and were probably in Ireland as well. Even Julius Caeser coudn’t sort them out between Germans and Celts…so we could be as British as the next guy.
If anything my DNA is the DNA of people on the edge. We’re on the edge of Asia, We’re on the edge of the main Celtic hubs, on the Edge of the European continent. On the edge of England, Ireland, Scotland and Wales. Living on the edges of England and Scotland. On the edge of The British colonies in the new world. These are people that are always in motion, always pushing outside the bounds. They’re always going to be the “other”.
For a refreshing break from considering all the carnage and mayhem my genes may have caused in the world read this article entitled:

Germanic invaders ‘did not bring apartheid’ to Anglo Saxon Britain

I’ll leave off with this thought. I’ve seen a few references to vikings in recent years that give them Scottish accents (robots, how to train your dragon, one even shows up in the 13th warrior) mostly because the Scottish accent sounds damn cool.
In our case though, maybe it’s true.