As you go through this it may help to reference Migrations 1 – 3 to see the other maps I’m comparing to.

Early on in my search the things I found left me pretty well established in Northern Ireland. I had a couple of family trees that landed there and my DNA seemed to be very close to the Northwest Irish Modal. Everything fit nicely.  When you look at the map of R1b the odds are in favor of being from a Celtic nation.  I have to admit, that would suit me just fine.

One of the first things I ran into was the OGAP map which mapped out migration paths for OGAP groups. Our OGAP group would be OGAP19.

And that’s okay. You can see the path through Southern England into Ireland and over to the Western Isles which makes total sense. It would also explain the odd North South split in my matches in Britain.  In some ways it also backs up the MacTavish claim to Thompsons. Except that no Thompsons look like me…but still, for me it worked out. I’m a Celt.

But again there is that nagging feeling that something is amiss. It’s not just that I don’t see any Thompsons in my matches. I don’t see a lot of highland clans in there. I see a lot of Brits and Quite a few Scots both east and west, also I see Scandinavians and Germans, Swiss, Polish and Austrians even a few Baltic Russians.  This analysis is running on so few numbers that they’re called bikini haplotypes.  They just don’t cover much and can lead to a lot of assumptions. I’m sure for many people this map and migration route is correct. For me, I fear it isn’t.

Here is a more consolidated map of the range of my matches taken from the other maps I’ve made. 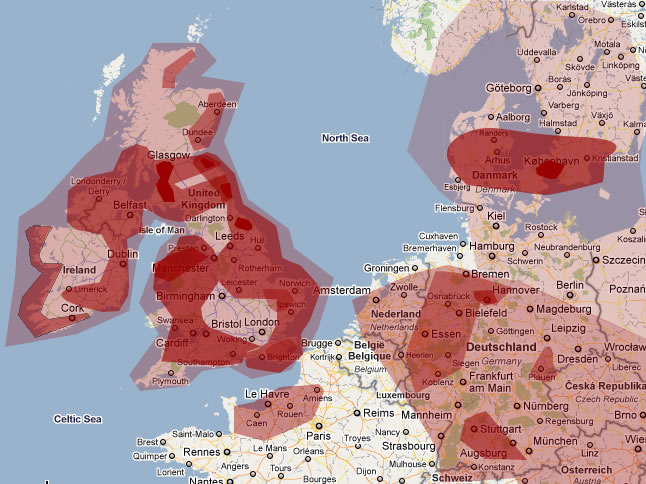 Now given that this is trying to map ancient people to their relatives today, there is some room for fudging. Also in the scope of this map you’re missing the Austrians, Czechs, North Italians, and Polish. Also under-represented are the few Norwegians in the mix. You can’t ignore though that there is a large dip in France and that there is a decidedly “Northern” and roughly coastal flavor to my matches. It’s not too unlike the OGAP map though.

I recently had someone label me a North Sea Celt, but I can’t say that all R1b people are Celts. There wasn’t ever a hard line between these peoples that I can see so my Ancestors may have spoken a Celtic language but it also seems really likely that they spoke a Germanic Language. When all the other Celts are lining up behind the Basques, my family seems to be lining up with the Germans.

Because there are so few of us and we are so spread out, it’s hard to discern a true pattern, but I’m going to try. As I look at things more and more it becomes a bit more I get the feeling that we’re much more Germanic than I, at first, suspected.

Take a look at this graphic. It’s from a paper by Campbell that talks about Capelli’s groups in the British Isles and gives some stats on where people who looked like that came from. I’ve only included my match here, but I think it’s kind of telling.

At first is seemed to me that this was a really Celtic set with all the matches in the Western Isles and Llangefni in Wales, but now I look at my maps and some maps of more recent history than these OGAP migrations and I think that maybe people who look like me came in one of the waves of Germanic tribes. Whether it was Vikings from Norway or Denmark or Angles and Saxons or some other Baltic Sea tribe like the Geats. It started to come together when I looked at this map of Viking England on a Children’s homework site.

Here is England while it was under Cnut the viking King of Denmark:

On this map from Wikipedia the Britons are the Celts and the other named groups are Angles Saxons and Jutes. Most Thompsons in Britain live right up there in Northumbria about where it says Bernicians. There are many Bernician names that make up my matches.
For more representation on the continent here is a map of the Ingavoenes. The “People of Yngvi”. Some think it’s where the Angles get their name. 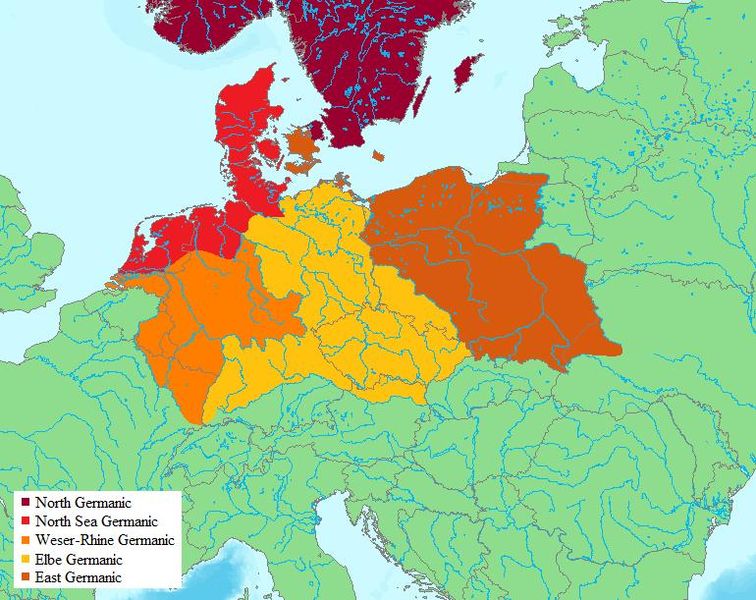 To me, it seems that my matches can always be found where there is a Germanic influence in Britain and Ireland. My matches in northern Ireland are probably not because I match an Irish gene, but because I match a Germanic group along with other lowland Scots and Northern British. Both Scots and Northumbrian English are Germanic languages (as is old English). The closest language to English and Scots today is Frisian.
To add more fuel to the Germanic fire, I was looking at the results for the Knowlton DNA project because they are closest to me in almost any search and they seem to share my 16.2 at DYS458 (sometimes these .2 numbers at DYS 458 are referred to as 458.2) which is pretty rare. It’s something like 1% of people at SMGFs Y database.
I noticed that one of their people is S21 positive. Most just show R1b1b2* but one person had more testing and came up with S21 or R1b-U106 or at this time: R1b1b2a1a1*.
At the same time, I ran into this bit from Genebase in their tutorials section:

Unusually short DYS458 alleles (DYS458.2) are associated with R1b1b2a1 (S21, aka M405).  Cases of this allele have so far been detected in Ireland, England, Germany, the Netherlands and the U.S. (1-5%) and this appears to a unique west European marker.   The DYS458.2 allele also occurs independently in the Y-chromosome J1 subclade.
The R1b1b2a1 (S21+) is a prominent R1b subclade and is likely the major subclade in resolving identity after the R1b1b2 (M269+) subclade.  It frequency is highest in the Dutch (35%) and it is also rather high in England, Germany, Austria, Denmark, Czech Republic and Switzerland (13-23%).  This region overlaps origins of Germanic groups, such as the Anglo-Saxons in Frisia.  It does not appear to have extended its reach beyond West and Central Europe (except recent migration to the U.S.).
The levels of the R1b1b2a (S127+) subclade in conjunction with other R subclades have not been reported to date.  Check this site regularly for updates on this subclade as new information will be posted as studies become available.

So there are my DYS458.2 numbers that are so rare. I also read somewhere that the J1 subclade is 19.2 and above where the R1b U106 seem to be 18.2 or less. (I don’t remember where I saw it so it should be verified. The entire article from the study can be seen at the U106 DNA project site or directly here.
R1b S21/U106/M405 makes up about 25% of Europe, if we’re S21 then why then do I have such a hard time matching people? Well, we’re not exactly the “norm” for S21. We don’t fit the modal there much better than anywhere else.  It just seems right, right now.
All of this is conjecture without actual SNP testing, but it could inform the kinds of tests I try when I do look.  For all I know we really are the Irish Modal and this has been a complete waste of time. This idea seems to fit right now though with all the odd locations and the broad match set. With this in hand, when I have some money to burn, I’ll order some kind of testing that will give me SNPs to work with. Then we’ll have a much better idea of where we fit.

Next up, I’ll go over the broad theories I have about all this and how it could effect my search.