One piece of Advice was to find off modal matches. These are people who match me at my off modal markers. Basically, they have the same mutations from modal R1b that I have at specific points, but could be different elsewhere. I made a new ysearch id that is just my off modal markers (with a few modal markers there to bulk it up and keep things on track). Then I mapped those out. Many of the names on the list are familiar to me from searching for my 9 and 16 slow marker map. 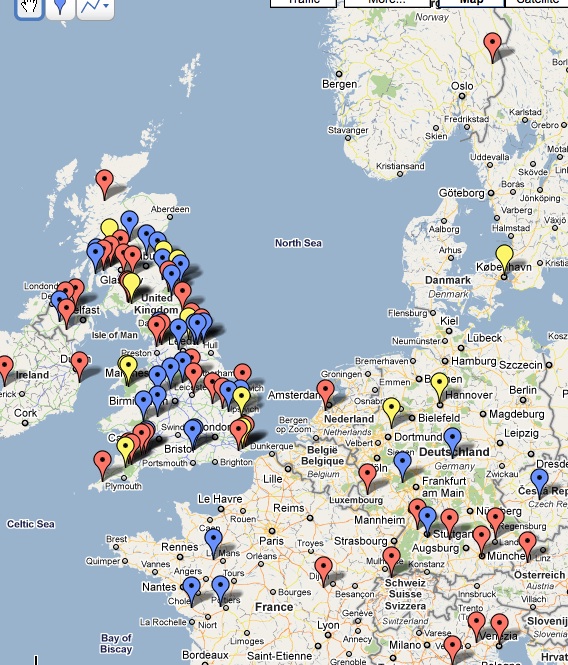 For this map I used a variety of sources for positioning, House of Names, Surname DB, their own Pedigrees (if available) and whatever they may have listed in ysearch as an origin. I later color coded the results by how closely they match me. Blue pins match many of my off modal numbers but they have a value of 10 for DYS391 (I have 11 and it’s a slow marker). Red pins have DYS391 = 11. Yellow pins with black dots have the odd 391=11, 385a=11 and 385b=11. Finally yellow pins without dots match my off modal markers further beyond 12 markers (so they have more matches overall). That is an artifact of the kind of test they had. Many people only have the 12 marker test so I would never know if they match me beyond 12 markers.

The overwhelming amount of hits in the U.K. might be proof of ancestry or it could be proof of the high rate of DNA testing done in the U.K. The specimen in Denmark is an odd man out. I haven’t found many matches in Denmark at all, Ironic given their colonization of Britain. I don’t know who “Danish Specimen” is from ysearch, but the Vikings did take Scottish and British slaves during their raids, sometimes numbering in the thousands. It could be indicative of that era. There is one match from Spain who is not shown.

A closer look at the British map. The yellow without black dot markers are those that share the most off modal markers with me.

The Norton is up there in Argyllshire. On the 1881 map in people profiler Nortons are more common in East Anglia, The Midlands, Yorkshire and Ireland around Dublin and the Irish Midlands. Not Argyllshire or Kent as House of Names gives for the homeland of those people.

The Burnett placed in Berwickshire by HON (near Edinburgh). In 1881 there are more Burnetts in Aberdeen and Harrogate (near York).

Thompson placed in Cumbria by HON, in 1881 is represented well in Cumbria but most popular in Newcastle Upon Tyne in Tyne and Wear near Northumberland. The most popular Thompson Postal city is Belford north up the coast from Newcastle Upon Tyne near the Scottish border.  Oddly enough, google searches for Belford turn up Belford Cumbria which makes it hard to determine if Belford is part of some greater “Cumbria” unrelated to the County Cumbria that has Carlisle in it.

Bell placed in Cumbria by HON and on this map is popular in Cumbria, Dumfriesshire and Northumberland on or over the Scottish border. Carlisle is the top area. Ravenglass (in Cumbria) is the top postal town. Bell is also the only other well known Borders area family name in this little Yellow pin without dot list besides Thompson. There are plenty of borders families represented in other colored pins but Bell has the most markers to match mine.

Keyes placed in Yorkshire by HON. In 1881 the only place they are common in Britain is tiny Southend by Sea which is between Kent and East Anglia. The name is actually most common in Ireland in Offaly and Laois.

Knowlton (always comes up high in any sort of Match list because we have the most markers in Common) is placed in Kent by HON and in Kent or Dorset by Surnamedb. It’s most popular in Maine, New Hampshire and New Brunswick now. One Knowlton Family claims Kent in their pedigree. In 1881 Britain it’s most popular in Southampton a busy port city in the south central part of Britain.

Also in this group, but not on the British map, is the “Danish Specimen” mentioned above. I’m not sure what the testing rate is in Denmark. I’ve been to the Danish y dna project and there are not many people there. It may be that there are huge sections of the population that share this DNA pattern but because of lack of testing we’re not seeing it. Or, like I said above, it may be that this person represents a slave who passed on their DNA in their life in Denmark.

Obviously, given the small amount of total matches it’s safe to say that these people or family lines are probably not representative of their total surname populations. This entire map contains 2 Thompsons out of probably hundreds or thousands of records and we don’t even match each other that well.

Still these samples are pretty scattered. Like I said, Bell and Thompson are the only names that appear to be from the same region and even with that, we don’t appear to be representative of our surnames..in fact we seem to be quite odd. I think in all my maps an overall pattern is evident. If we’re to follow the general pattern of movement from east to west in R1b, some roughly Germano-Celtic people moved into England and from there Ireland. People who are yellow pins (dot or no) seem to be generally in northern and western Germany and then sort of peppered around Britain.

In this map my showing for Ireland is pretty small with most matches in Ulster. Since Ulster historically has been populated by Borders area Scots and English Reiver families (along with some contingent from Wales I’ve heard) it seems again really likely that we’re a border family. The odds are still in favor of the Thompsons having moved to North Ireland during the plantation and from there to America.